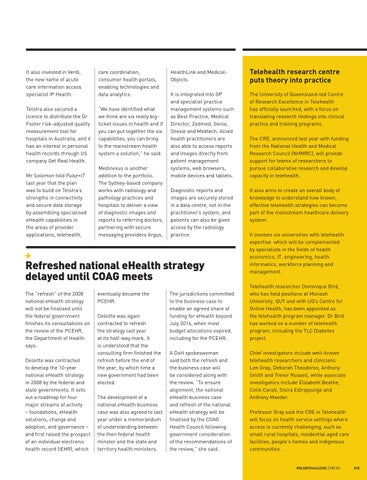 Telstra also secured a licence to distribute the Dr Foster risk-adjusted quality measurement tool for hospitals in Australia, and it has an interest in personal health records through US company Get Real Health.

“We have identified what we think are six really bigticket issues in health and if you can put together the six capabilities, you can bring to the mainstream health system a solution,” he said.

Mr Solomon told Pulse+IT last year that the plan was to build on Telstra’s strengths in connectivity and secure data storage by assembling specialised eHealth capabilities in the areas of provider applications, telehealth,

Medinexus is another addition to the portfolio. The Sydney-based company works with radiology and pathology practices and hospitals to deliver a view of diagnostic images and reports to referring doctors, partnering with secure messaging providers Argus,

The University of Queensland-led Centre of Research Excellence in Telehealth has officially launched, with a focus on translating research findings into clinical practice and training programs.

Diagnostic reports and images are securely stored in a data centre, not in the practitioner’s system, and patients can also be given access by the radiology practice.

It also aims to create an overall body of knowledge to understand how known, effective telehealth strategies can become part of the mainstream healthcare delivery system.

eventually became the PCEHR. Deloitte was again contracted to refresh the strategy last year at its half-way mark. It is understood that the consulting firm finished the refresh before the end of the year, by which time a new government had been elected. The development of a national eHealth business case was also agreed to last year under a memorandum of understanding between the then federal health minster and the state and territory health ministers.

The jurisdictions committed to the business case to enable an agreed share of funding for eHealth beyond July 2014, when most budget allocations expired, including for the PCEHR. A DoH spokeswoman said both the refresh and the business case will be considered along with the review. “To ensure alignment, the national eHealth business case and refresh of the national eHealth strategy will be finalised by the COAG Health Council following government consideration of the recommendations of the review,” she said.

The CRE, announced last year with funding from the National Health and Medical Research Council (NHMRC), will provide support for teams of researchers to pursue collaborative research and develop capacity in telehealth.

It involves six universities with telehealth expertise which will be complemented by specialists in the fields of health economics, IT, engineering, health informatics, workforce planning and management. Telehealth researcher Dominique Bird, who has held positions at Monash University, QUT and with UQ’s Centre for Online Health, has been appointed as the telehealth program manager. Dr Bird has worked on a number of telehealth program, including the TLC Diabetes project. Chief investigators include well-known telehealth researchers and clinicians Len Gray, Deborah Theodoros, Anthony Smith and Trevor Russell, while associate investigators include Elizabeth Beattie, Colin Carati, Sisira Edirippulige and Anthony Maeder. Professor Gray said the CRE in Telehealth will focus on health service settings where access is currently challenging, such as small rural hospitals, residential aged care facilities, people’s homes and indigenous communities.