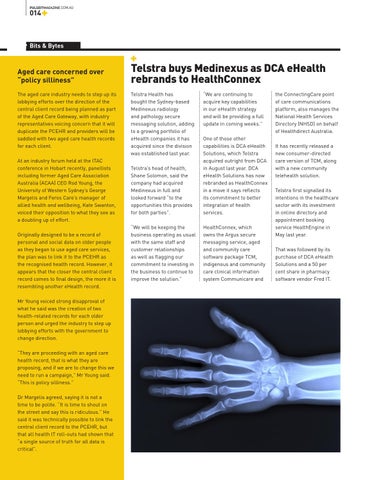 Aged care concerned over “policy silliness” The aged care industry needs to step up its lobbying efforts over the direction of the central client record being planned as part of the Aged Care Gateway, with industry representatives voicing concern that it will duplicate the PCEHR and providers will be saddled with two aged care health records for each client. At an industry forum held at the ITAC conference in Hobart recently, panellists including former Aged Care Association Australia (ACAA) CEO Rod Young, the University of Western Sydney’s George Margelis and Feros Care’s manager of allied health and wellbeing, Kate Swanton, voiced their opposition to what they see as a doubling up of effort. Originally designed to be a record of personal and social data on older people as they began to use aged care services, the plan was to link it to the PCEHR as the recognised health record. However, it appears that the closer the central client record comes to final design, the more it is resembling another eHealth record. Mr Young voiced strong disapproval of what he said was the creation of two health-related records for each older person and urged the industry to step up lobbying efforts with the government to change direction. “They are proceeding with an aged care health record, that is what they are proposing, and if we are to change this we need to run a campaign,” Mr Young said. “This is policy silliness.” Dr Margelis agreed, saying it is not a time to be polite. “It is time to shout on the street and say this is ridiculous.” He said it was technically possible to link the central client record to the PCEHR, but that all health IT roll-outs had shown that “a single source of truth for all data is critical”.

Telstra buys Medinexus as DCA eHealth rebrands to HealthConnex Telstra Health has bought the Sydney-based Medinexus radiology and pathology secure messaging solution, adding to a growing portfolio of eHealth companies it has acquired since the division was established last year.

“We are continuing to acquire key capabilities in our eHealth strategy and will be providing a full update in coming weeks.”

Telstra’s head of health, Shane Solomon, said the company had acquired Medinexus in full and looked forward “to the opportunities this provides for both parties”.

“We will be keeping the business operating as usual with the same staff and customer relationships as well as flagging our commitment to investing in the business to continue to improve the solution.”

the ConnectingCare point of care communications platform, also manages the National Health Services Directory (NHSD) on behalf of Healthdirect Australia. It has recently released a new consumer-directed care version of TCM, along with a new community telehealth solution. Telstra first signalled its intentions in the healthcare sector with its investment in online directory and appointment booking service HealthEngine in May last year. That was followed by its purchase of DCA eHealth Solutions and a 50 per cent share in pharmacy software vendor Fred IT.