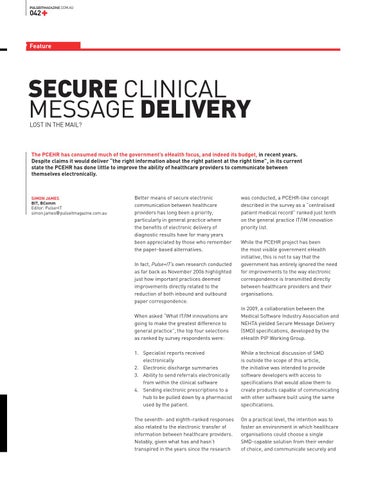 The PCEHR has consumed much of the government’s eHealth focus, and indeed its budget, in recent years. Despite claims it would deliver “the right information about the right patient at the right time”, in its current state the PCEHR has done little to improve the ability of healthcare providers to communicate between themselves electronically.

Better means of secure electronic communication between healthcare providers has long been a priority, particularly in general practice where the benefits of electronic delivery of diagnostic results have for many years been appreciated by those who remember the paper-based alternatives. In fact, Pulse+IT’s own research conducted as far back as November 2006 highlighted just how important practices deemed improvements directly related to the reduction of both inbound and outbound paper correspondence.

was conducted, a PCEHR‑like concept described in the survey as a “centralised patient medical record” ranked just tenth on the general practice IT/IM innovation priority list. While the PCEHR project has been the most visible government eHealth initiative, this is not to say that the government has entirely ignored the need for improvements to the way electronic correspondence is transmitted directly between healthcare providers and their organisations.

When asked “What IT/IM innovations are going to make the greatest difference to general practice”, the top four selections as ranked by survey respondents were:

1. Specialist reports received electronically 2. Electronic discharge summaries 3. Ability to send referrals electronically from within the clinical software 4. Sending electronic prescriptions to a hub to be pulled down by a pharmacist used by the patient.

While a technical discussion of SMD is outside the scope of this article, the initiative was intended to provide software developers with access to specifications that would allow them to create products capable of communicating with other software built using the same specifications.

The seventh- and eighth-ranked responses also related to the electronic transfer of information between healthcare providers. Notably, given what has and hasn’t transpired in the years since the research

On a practical level, the intention was to foster an environment in which healthcare organisations could choose a single SMD‑capable solution from their vendor of choice, and communicate securely and