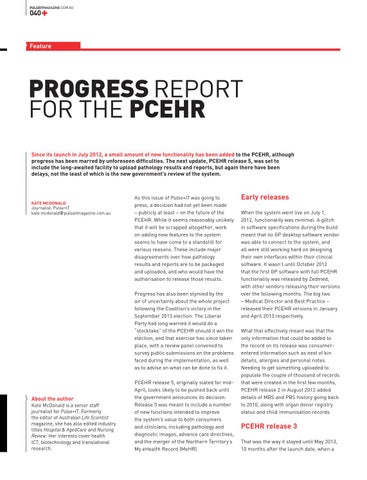 PROGRESS REPORT FOR THE PCEHR Since its launch in July 2012, a small amount of new functionality has been added to the PCEHR, although progress has been marred by unforeseen difficulties. The next update, PCEHR release 5, was set to include the long-awaited facility to upload pathology results and reports, but again there have been delays, not the least of which is the new government’s review of the system.

As this issue of Pulse+IT was going to press, a decision had not yet been made – publicly at least – on the future of the PCEHR. While it seems reasonably unlikely that it will be scrapped altogether, work on adding new features to the system seems to have come to a standstill for various reasons. These include major disagreements over how pathology results and reports are to be packaged and uploaded, and who would have the authorisation to release those results. Progress has also been stymied by the air of uncertainty about the whole project following the Coalition’s victory in the September 2013 election. The Liberal Party had long warned it would do a “stocktake” of the PCEHR should it win the election, and that exercise has since taken place, with a review panel convened to survey public submissions on the problems faced during the implementation, as well as to advise on what can be done to fix it.

PCEHR release 5, originally slated for midApril, looks likely to be pushed back until the government announces its decision. Release 5 was meant to include a number of new functions intended to improve the system’s value to both consumers and clinicians, including pathology and diagnostic images, advance care directives, and the merger of the Northern Territory’s My eHealth Record (MeHR).

Early releases When the system went live on July 1, 2012, functionality was minimal. A glitch in software specifications during the build meant that no GP desktop software vendor was able to connect to the system, and all were still working hard on designing their own interfaces within their clinical software. It wasn’t until October 2012 that the first GP software with full PCEHR functionality was released by Zedmed, with other vendors releasing their versions over the following months. The big two – Medical Director and Best Practice – released their PCEHR versions in January and April 2013 respectively. What that effectively meant was that the only information that could be added to the record on its release was consumerentered information such as next of kin details, allergies and personal notes. Needing to get something uploaded to populate the couple of thousand of records that were created in the first few months, PCEHR release 2 in August 2012 added details of MBS and PBS history going back to 2010, along with organ donor registry status and child immunisation records.

PCEHR release 3 That was the way it stayed until May 2013, 10 months after the launch date, when a