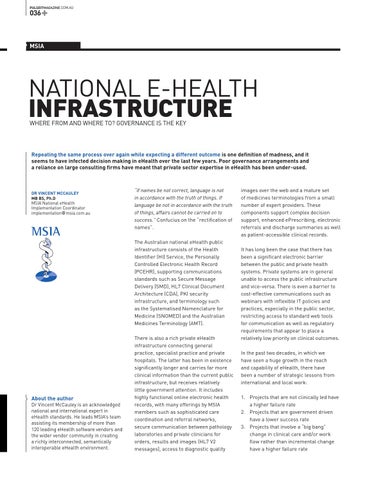 NATIONAL E-HEALTH INFRASTRUCTURE WHERE FROM AND WHERE TO? GOVERNANCE IS THE KEY

Repeating the same process over again while expecting a different outcome is one definition of madness, and it seems to have infected decision making in eHealth over the last few years. Poor governance arrangements and a reliance on large consulting firms have meant that private sector expertise in eHealth has been under-used.

“If names be not correct, language is not in accordance with the truth of things. If language be not in accordance with the truth of things, affairs cannot be carried on to success.” Confucius on the “rectification of names”. The Australian national eHealth public infrastructure consists of the Health Identifier (HI) Service, the Personally Controlled Electronic Health Record (PCEHR), supporting communications standards such as Secure Message Delivery (SMD), HL7 Clinical Document Architecture (CDA), PKI security infrastructure, and terminology such as the Systematised Nomenclature for Medicine (SNOMED) and the Australian Medicines Terminology (AMT).

About the author Dr Vincent McCauley is an acknowledged national and international expert in eHealth standards. He leads MSIA’s team assisting its membership of more than 120 leading eHealth software vendors and the wider vendor community in creating a richly interconnected, semantically interoperable eHealth environment.

images over the web and a mature set of medicines terminologies from a small number of expert providers. These components support complex decision support, enhanced ePrescribing, electronic referrals and discharge summaries as well as patient-accessible clinical records. It has long been the case that there has been a significant electronic barrier between the public and private health systems. Private systems are in general unable to access the public infrastructure and vice-versa. There is even a barrier to cost-effective communications such as webinars with inflexible IT policies and practices, especially in the public sector, restricting access to standard web tools for communication as well as regulatory requirements that appear to place a relatively low priority on clinical outcomes. In the past two decades, in which we have seen a huge growth in the reach and capability of eHealth, there have been a number of strategic lessons from international and local work: 1. Projects that are not clinically led have a higher failure rate 2. Projects that are government driven have a lower success rate 3. Projects that involve a “big bang” change in clinical care and/or work flow rather than incremental change have a higher failure rate