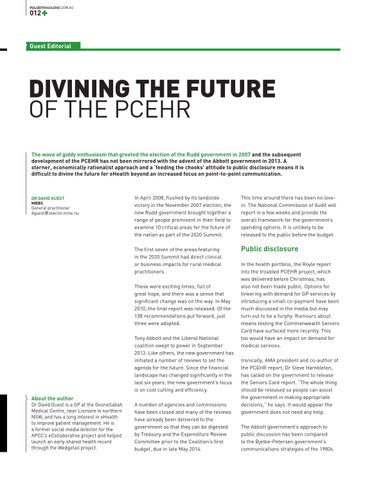 DIVINING THE FUTURE OF THE PCEHR The wave of giddy enthusiasm that greeted the election of the Rudd government in 2007 and the subsequent development of the PCEHR has not been mirrored with the advent of the Abbott government in 2013. A sterner, economically rationalist approach and a ‘feeding the chooks’ attitude to public disclosure means it is difficult to divine the future for eHealth beyond an increased focus on point-to-point communication.

In April 2008, flushed by its landslide victory in the November 2007 election, the new Rudd government brought together a range of people prominent in their field to examine 10 critical areas for the future of the nation as part of the 2020 Summit.

This time around there has been no lovein. The National Commission of Audit will report in a few weeks and provide the overall framework for the government’s spending options. It is unlikely to be released to the public before the budget.

The first seven of the areas featuring in the 2020 Summit had direct clinical or business impacts for rural medical practitioners.

These were exciting times, full of great hope, and there was a sense that significant change was on the way. In May 2010, the final report was released. Of the 138 recommendations put forward, just three were adopted. Tony Abbott and the Liberal National coalition swept to power in September 2013. Like others, the new government has initiated a number of reviews to set the agenda for the future. Since the financial landscape has changed significantly in the last six years, the new government’s focus is on cost cutting and efficiency.

About the author Dr David Guest is a GP at the Goonellabah Medical Centre, near Lismore in northern NSW, and has a long interest in eHealth to improve patient management. He is a former social media director for the APCC’s eCollaborative project and helped launch an early shared health record through the Wedgetail project.

A number of agencies and commissions have been closed and many of the reviews have already been delivered to the government so that they can be digested by Treasury and the Expenditure Review Committee prior to the Coalition’s first budget, due in late May 2014.

In the health portfolio, the Royle report into the troubled PCEHR project, which was delivered before Christmas, has also not been made public. Options for tinkering with demand for GP services by introducing a small co-payment have been much discussed in the media but may turn out to be a furphy. Rumours about means testing the Commonwealth Seniors Card have surfaced more recently. This too would have an impact on demand for medical services. Ironically, AMA president and co-author of the PCEHR report, Dr Steve Hambleton, has called on the government to release the Seniors Card report. “The whole thing should be released so people can assist the government in making appropriate decisions,” he says. It would appear the government does not need any help. The Abbott government’s approach to public discussion has been compared to the Bjelke-Petersen government’s communications strategies of the 1980s.