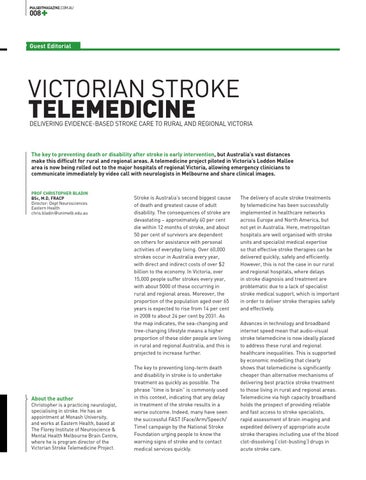 About the author Christopher is a practicing neurologist, specialising in stroke. He has an appointment at Monash University, and works at Eastern Health, based at The Florey Institute of Neuroscience & Mental Health Melbourne Brain Centre, where he is program director of the Victorian Stroke Telemedicine Project.

Stroke is Australia’s second biggest cause of death and greatest cause of adult disability. The consequences of stroke are devastating – approximately 40 per cent die within 12 months of stroke, and about 50 per cent of survivors are dependent on others for assistance with personal activities of everyday living. Over 60,000 strokes occur in Australia every year, with direct and indirect costs of over $2 billion to the economy. In Victoria, over 15,000 people suffer strokes every year, with about 5000 of these occurring in rural and regional areas. Moreover, the proportion of the population aged over 65 years is expected to rise from 14 per cent in 2008 to about 24 per cent by 2031. As the map indicates, the sea-changing and tree-changing lifestyle means a higher proportion of these older people are living in rural and regional Australia, and this is projected to increase further. The key to preventing long-term death and disability in stroke is to undertake treatment as quickly as possible. The phrase “time is brain” is commonly used in this context, indicating that any delay in treatment of the stroke results in a worse outcome. Indeed, many have seen the successful FAST (Face/Arm/Speech/ Time) campaign by the National Stroke Foundation urging people to know the warning signs of stroke and to contact medical services quickly.

The delivery of acute stroke treatments by telemedicine has been successfully implemented in healthcare networks across Europe and North America, but not yet in Australia. Here, metropolitan hospitals are well organised with stroke units and specialist medical expertise so that effective stroke therapies can be delivered quickly, safely and efficiently. However, this is not the case in our rural and regional hospitals, where delays in stroke diagnosis and treatment are problematic due to a lack of specialist stroke medical support, which is important in order to deliver stroke therapies safely and effectively. Advances in technology and broadband internet speed mean that audio-visual stroke telemedicine is now ideally placed to address these rural and regional healthcare inequalities. This is supported by economic modelling that clearly shows that telemedicine is significantly cheaper than alternative mechanisms of delivering best practice stroke treatment to those living in rural and regional areas. Telemedicine via high capacity broadband holds the prospect of providing reliable and fast access to stroke specialists, rapid assessment of brain imaging and expedited delivery of appropriate acute stroke therapies including use of the blood clot-dissolving (‘clot-busting’) drugs in acute stroke care.