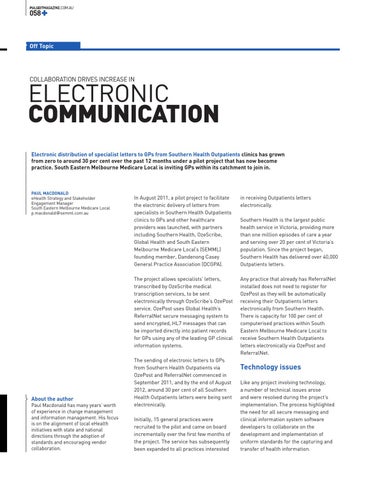 ELECTRONIC COMMUNICATION Electronic distribution of specialist letters to GPs from Southern Health Outpatients clinics has grown from zero to around 30 per cent over the past 12 months under a pilot project that has now become practice. South Eastern Melbourne Medicare Local is inviting GPs within its catchment to join in.

About the author Paul Macdonald has many years’ worth of experience in change management and information management. His focus is on the alignment of local eHealth initiatives with state and national directions through the adoption of standards and encouraging vendor collaboration.

Any practice that already has ReferralNet installed does not need to register for OzePost as they will be automatically receiving their Outpatients letters electronically from Southern Health. There is capacity for 100 per cent of computerised practices within South Eastern Melbourne Medicare Local to receive Southern Health Outpatients letters electronically via OzePost and ReferralNet.

The sending of electronic letters to GPs from Southern Health Outpatients via OzePost and ReferralNet commenced in September 2011, and by the end of August 2012, around 30 per cent of all Southern Health Outpatients letters were being sent electronically. Initially, 15 general practices were recruited to the pilot and came on board incrementally over the first few months of the project. The service has subsequently been expanded to all practices interested

Southern Health is the largest public health service in Victoria, providing more than one million episodes of care a year and serving over 20 per cent of Victoria’s population. Since the project began, Southern Health has delivered over 40,000 Outpatients letters.

Technology issues Like any project involving technology, a number of technical issues arose and were resolved during the project’s implementation. The process highlighted the need for all secure messaging and clinical information system software developers to collaborate on the development and implementation of uniform standards for the capturing and transfer of health information.