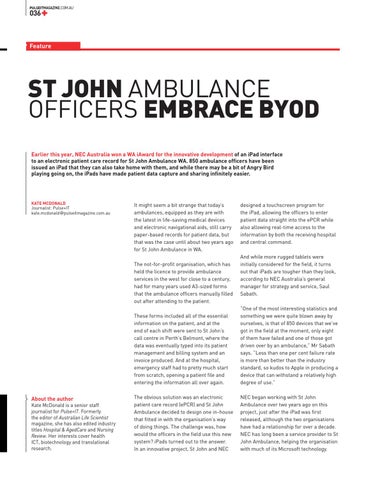 ST JOHN AMBULANCE OFFICERS EMBRACE BYOD Earlier this year, NEC Australia won a WA iAward for the innovative development of an iPad interface to an electronic patient care record for St John Ambulance WA. 850 ambulance officers have been issued an iPad that they can also take home with them, and while there may be a bit of Angry Bird playing going on, the iPads have made patient data capture and sharing infinitely easier.

It might seem a bit strange that today’s ambulances, equipped as they are with the latest in life-saving medical devices and electronic navigational aids, still carry paper-based records for patient data, but that was the case until about two years ago for St John Ambulance in WA. The not-for-profit organisation, which has held the licence to provide ambulance services in the west for close to a century, had for many years used A3-sized forms that the ambulance officers manually filled out after attending to the patient.

designed a touchscreen program for the iPad, allowing the officers to enter patient data straight into the ePCR while also allowing real-time access to the information by both the receiving hospital and central command. And while more rugged tablets were initially considered for the field, it turns out that iPads are tougher than they look, according to NEC Australia’s general manager for strategy and service, Saul Sabath.

These forms included all of the essential information on the patient, and at the end of each shift were sent to St John’s call centre in Perth’s Belmont, where the data was eventually typed into its patient management and billing system and an invoice produced. And at the hospital, emergency staff had to pretty much start from scratch, opening a patient file and entering the information all over again.

“One of the most interesting statistics and something we were quite blown away by ourselves, is that of 850 devices that we’ve got in the field at the moment, only eight of them have failed and one of those got driven over by an ambulance,” Mr Sabath says. “Less than one per cent failure rate is more than better than the industry standard, so kudos to Apple in producing a device that can withstand a relatively high degree of use.”

The obvious solution was an electronic patient care record (ePCR) and St John Ambulance decided to design one in-house that fitted in with the organisation’s way of doing things. The challenge was, how would the officers in the field use this new system? iPads turned out to the answer. In an innovative project, St John and NEC

NEC began working with St John Ambulance over two years ago on this project, just after the iPad was first released, although the two organisations have had a relationship for over a decade. NEC has long been a service provider to St John Ambulance, helping the organisation with much of its Microsoft technology.