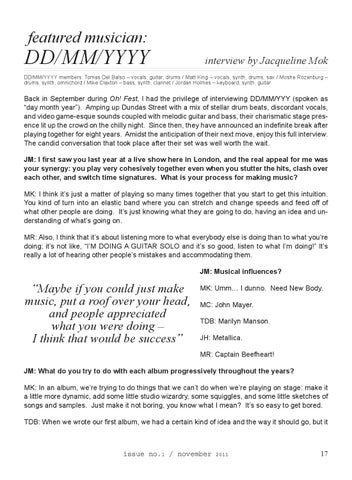 Back in September during Oh! Fest, I had the privilege of interviewing DD/MM/YYY (spoken as “day month year”). Amping up Dundas Street with a mix of stellar drum beats, discordant vocals, and video game-esque sounds coupled with melodic guitar and bass, their charismatic stage presence lit up the crowd on the chilly night. Since then, they have announced an indefinite break after playing together for eight years. Amidst the anticipation of their next move, enjoy this full interview. The candid conversation that took place after their set was well worth the wait. JM: I first saw you last year at a live show here in London, and the real appeal for me was your synergy: you play very cohesively together even when you stutter the hits, clash over each other, and switch time signatures. What is your process for making music? MK: I think it’s just a matter of playing so many times together that you start to get this intuition. You kind of turn into an elastic band where you can stretch and change speeds and feed off of what other people are doing. It’s just knowing what they are going to do, having an idea and understanding of what’s going on. MR: Also, I think that it’s about listening more to what everybody else is doing than to what you’re doing; it’s not like, “I’M DOING A GUITAR SOLO and it’s so good, listen to what I’m doing!” It’s really a lot of hearing other people’s mistakes and accommodating them. JM: Musical influences?

“Maybe if you could just make music, put a roof over your head, and people appreciated what you were doing – I think that would be success”

JM: What do you try to do with each album progressively throughout the years? MK: In an album, we’re trying to do things that we can’t do when we’re playing on stage: make it a little more dynamic, add some little studio wizardry, some squiggles, and some little sketches of songs and samples. Just make it not boring, you know what I mean? It’s so easy to get bored. TDB: When we wrote our first album, we had a certain kind of idea and the way it should go, but it 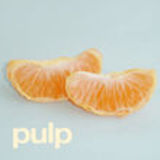