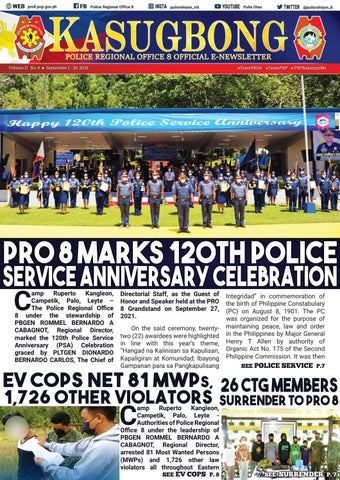 Directorial Staff, as the Guest of Honor and Speaker held at the PRO 8 Grandstand on September 27, 2021. On the said ceremony, twentytwo (22) awardees were highlighted in line with this year’s theme, “Hangad na Kalinisan sa Kapulisan, Kapaligiran at Komunidad; Ibayong Gampanan para sa Pangkapulisang

Integridad” in commemoration of the birth of Philippine Constabulary (PC) on August 8, 1901. The PC was organized for the purpose of maintaining peace, law and order in the Philippines by Major General Henry T Allen by authority of Organic Act No. 175 of the Second Philippine Commission. It was then SEE POLICE

ALLEGED RAPIST FALLS INTO THE HANDS OF LEYTE COPS

Said suspects were arrested after selling illegal drugs (shabu) to police undercover agents. In total, authorities confiscated more or less Twelve (12) grams of suspected shabu with an estimated market value of Php 82, 600.00 and other Twelve (12) sachets of said illegal drug with no estimated worth value as of this writing. Cases for Violation of Section 5 and 11 under Republic Act No 9165 or the Comprehensive Dangerous Drugs Act of 2002 are now being prepared for filing in court against said suspects. The buy-bust operations were carried out by police authorities from Palo Municipal Police Station (MPS), Leyte Police Provincial Office; Tacloban City Police Office; and Maasin MPS, Southern Leyte Police Provincial Office in coordination with the Philippine

PBGEN CABAGNOT is determined in eradicating illegal drugs in the region. “I commend the personnel who are exerting their best in arresting individuals who sell, use and buy illegal drugs. I hope the public will be of great help by monitoring their respective places of residence,” RD CABAGNOT said. He further stressed that PRO 8 will be working hand in hand with PDEA and other law enforcement agencies in eliminating illegal drug activities in Eastern Visayas.

POLICE OFFICERS SAVE 50 FISHERMEN DURING SEARCH, RESCUE AND RETRIEVAL OPERATIONS

Alejandro Solayao and Sanieboy Ebayan, both residents of Tacloban City, were retrieved at seawaters of Brgy. Buenavista. Said personnel likewise coordinated with nearby island police stations regarding the incident. The search, rescue and retrieval operations initiated instantaneously by Sto. Niño MPS lasted for about thirteen (13) hours, with the prompt assistance of the Local Government Unit of Sto. Niño and other members of the community. An Emergency Health Station for rescued typhoon victims was also established in the Municipal Gym/ Covered Court to provide first aid and immediate

A clearing operation was being conducted by the personnel of Sto. Niño Municipal Police Station when a concerned citizen reported the incident. Immediately, personnel of Sto. Niño MPS promptly boarded a motorboat upon receipt of the information and were able to rescue three (3) fishermen. Thereafter, two (2) lifeless bodies who were later identified as

amp Ruperto Kangleon Campetik, Palo, Leyte - Authorities of Police Regional Office 8 under the flagship of PBGEN ROMMEL BERNARDO A CABAGNOT arrested 18 personalities engaging in illegal fishing and recorded two (2) individuals who were killed while fishing using a dynamite during the conduct of police operations on September 17-19, 2021. A total of 18 personalities involved in illegal fishing were arrested by police personnel from Northern Samar, Leyte and Southern Leyte. Authorities were able to confiscate assorted fish and fishing paraphernalia with an estimated worth Php 37,150.00. Arrested individuals were brought to their areas of jurisdiction for documentation and proper disposition. Meanwhile on September 18, 2021, police authorities of Tinambacan Police Community Precinct under Calbayog City Police Station responded to the dynamite explosion along the shoreline of Brgy. Malayog, Tinambacan District, Calbayog City. Reportedly, one (1) was killed instantly, two were wounded and were rushed to the nearest hospital, while the other one (1)

went missing and was found dead in the afternoon of same day. “We have been consistent in reminding the public on the danger of any illegal fishing activities. We are also intensifying our police operations against illegal fishing and yet, there are still who violate. May this be a reminder to the public that there is no good in engaging any illegal activities,” RD CABAGNOT said.

PRO 8 JOINS IN THE BARANGAYANIHAN CARAVAN IN CATARMAN, NORTHERN SAMAR The whole Philippine National Police (PNP) is working hand in hand with other government agencies to provide to the public assistance in any possible ways. “My gratitude to all the working force behind this Barangayanihan. As our country is still facing this crisis brought by this pandemic, it is our mission to be of service to the public. I am looking forward to be working with you again in the same noble undertaking,” RD CABAGNOT said.

amp Ruperto Kangleon Campetik, Palo, Leyte -The Police Regional Office 8 under the leadership of PBGEN ROMMEL BERNARDO A CABAGNOT, Regional Director, through the Office of the Regional Community Affairs and Development Division (RCADD) supervised by PLTCOL JOSE MANUEL C PAYOS actively participated in the nationwide launching of The Duterte Legacy: “Barangayanihan Caravan Towards National Recovery” along with other government agencies held at the University of Eastern Philippines (UEP) Gymnatorium, Catarman, Northern Samar on September 30, 2021. RCADD distributed food packs, assorted vegetables and condiments, pail, bucket and assorted clothes to 80 recipients of said place and handed over a wheelchair, family emergency kit and grocery items to One (1) bed ridden recipient. Likewise, following Offices rendered services through distribution of hygiene kits from the Office of the Civil Defense (OCD); cash assistance from the Department of Social Welfare and Development (DSWD); medical assistance, umbrella, snacks and lunch packs from the Philippine Charity Sweepstakes Office (PCSO); distribution of scholar allowance, starter tool kits, motorcycle services, haircut and body massage from the Technical Education and Skills and Development Authority (TESDA); business consultancy from the Department of Trade and Industry (DTI); National ID Program from the Philippine Statistics Authority (PSA); and Pangkabuhayan programs from the Department of Labor and Employment. Moreover, the Regional Medical and Dental Unit of this PRO (RMDU) rendered consultation; distributed medicines, vitamins and flyers for oral health. Further, the Regional Civil Service Unit of this Office (RCSU) conducted a License to Own and Possess Firearm (LTOPF) caravan.

conferred certificates of appreciation plus cash prizes. 1st Placer received Php 15,0000.00 cash prize, while 2nd and 3rd placers received Php 10,000.00 and Php 5, 000.00, respectively. “We are so pleased to have this kind of activity since this does not only portrays how multi-skilled our uniformed men and women are, but more significantly, this also allows and serves as venue for our youngsters, like our KKDAT members, to express and unleash their talents through this art , “ RD CABAGNOT stated. These mural paintings will be seen inside PRO 8 camp covering the walls situated near the entrance gate.

authorities aggressively and continuously put their best foot forward to combat criminality. In relation to the unswerving efforts of the government on anticriminality campaign, every 1st week of September (September 1-7) is officially proclaimed as the National Crime Prevention Week wherein all government agencies/entities and other participating stakeholders are enjoined to establish projects and activities advocating its efforts to end criminality. Moreover, in sustaining PNP’s efforts to prevent crimes, this PRO incessantly implements the Simultaneous Anti-Criminality Law Enforcement Operations (SACLEO) obtaining accomplishments on various police operations leading to the successful arrest of law offenders and violators. We had been combating and dealing with these issues since time immemorial. As law enforcement officers, it is always our task to prevent crimes from escalating, putting high regard on the safety of the people in the community. The Police Regional Office 8 in particular, always make it a point that the the welfare of the men and women of Eastern Visayas is at the forefront. Anything or anyone that might pose harm or injury to public’s security will be dealt with accordingly. Further, public is encouraged to be cooperative with the authorities especially in reporting any kind of incidents in order to thwart crimes.

See! Everyone can take part and has the moral obligation to be of help in our efforts to attain peace and order. Simple gestures like giving essential rime is not a welcoming scenario to deal with, information to police authorities can certainly lessen not in any way possible. To simply say, it implies crime-related incidents. Besides, crime prevention danger and dilemma posing great threat/s to does not only benefit the law enforcers but everyone the public’s safety and security. Despite the various else in the society. attempts of the government in addressing criminality, Crime prevention, is not just ONE’s business, but it still continues to exist, unavoidable at times, which rather, it is EVERYONE’s business! Let us be more undesirably affects both the economic and social aggressive and bold in its prevention. development of areas and/or places prone to it.

In spite of the unending occurrence of crimes,

Together, we can beat crimes!

. . . from Page 2 Alleged Rapist Falls into the Hands of Leyte Cops ALLEGED RAPIST

carried out the operation. The arrested accused was brought to Sta. Fe MPS for documentation and disposition prior turn over to the court of origin. PBGEN ROMMEL BERNARDO A CABAGNOT, Regional Director, commends the operatives for such accomplishment. “Through the intensified campaign against Most Wanted Persons, this person is finally arrested after long years of hiding from the law. To those who are still on the run from their committed crimes, we will not stop chasing after you,” RD CABAGNOT said.

In relation to the sustained anti-criminality efforts of this PRO, police authorities apprehended 81 Most Wanted Persons (MWPs) and 605 Other Wanted Persons from the Regional, Provincial, City, and Municipal Station level.

PBGEN CABAGNOT lauds the personnel for the success of the manhunt Charlie of this PRO. “I take pride on these accomplishments thus we will not cease in hunting down criminals who are living freely so justice will be served to the families of their victims,” RD CABAGNOT said.

Likewise, during the whole month of intensified implementation of special laws, this PRO yielded an arrest of 580 personalities involved in illegal fishing; 113 in illegal logging; 368 in illegal gambling; 46 drug suspects; and 14 personalities during the conduct of LOI Kontra Boga operations. As a result of the month-long simultaneous police operations, PRO 8 authorities seized 109.12 grams of Methamphetamine Hydrochloride (Shabu) with a total estimated street value of Php 709,259.85 from anti-illegal drug operations. In anti-illegal gambling, bet money and other cash amounting to Php 56,516.00 were confiscated. In anti-illegal logging operations, 16,116.11 board feet of lumbers were confiscated with an estimated worth total of Php 832,287.30. A total of Php 28,867,833.00 worth of fish and fishing paraphernalia were confiscated from anti-illegal fishing operations while 330 different firearms were confiscated and surrendered from kontra boga operations. Part of these accomplishments were the results from the regionwide conduct of Simultaneous Ant-Criminality Law Enforcement

Police Officers Save 50 Fishermen during Search, Rescue and Retrieval Operations medical attention to the wounded and rescued fishermen who were then provided with hot meals, dry clothes, slippers and other basic needs. Meanwhile, two (2) of the rescued fishermen succumbed to death, identified as follows: (1) Joseph Imnas; and (2) Benedicto De Paz. All the fifty (50) rescued survivors and the remains of four other (4) fishermen onboard the nine (9) wrecked motorboats were already transported to their respective places of residence on September 8. “An opportunity to save lives is a joy and rescuing fifty lives is indeed a great blessing. This was made possible with the presence of unified efforts of the Advocacy Groups and Force Multipliers who provided essential information and assistance during the calamity. Further, the swift and timely response of the police officers in this situation commendably saved the lives of these fishermen,” RD CABAGNOT said. 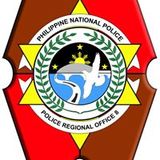