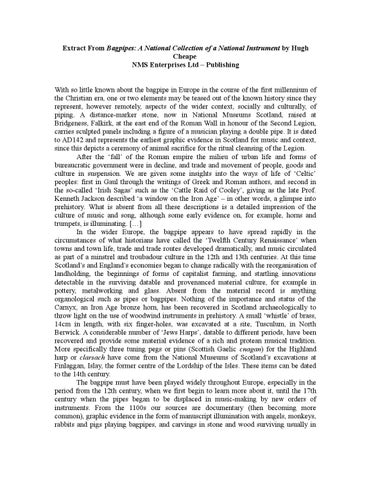 Extract From Bagpipes: A National Collection of a National Instrument by Hugh Cheape NMS Enterprises Ltd – Publishing With so little known about the bagpipe in Europe in the course of the first millennium of the Christian era, one or two elements may be teased out of the known history since they represent, however remotely, aspects of the wider context, socially and culturally, of piping. A distance-marker stone, now in National Museums Scotland, raised at Bridgeness, Falkirk, at the east end of the Roman Wall in honour of the Second Legion, carries sculpted panels including a figure of a musician playing a double pipe. It is dated to AD142 and represents the earliest graphic evidence in Scotland for music and context, since this depicts a ceremony of animal sacrifice for the ritual cleansing of the Legion. After the ‘fall’ of the Roman empire the milieu of urban life and forms of bureaucratic government were in decline, and trade and movement of people, goods and culture in suspension. We are given some insights into the ways of life of ‘Celtic’ peoples: first in Gaul through the writings of Greek and Roman authors, and second in the so-called ‘Irish Sagas’ such as the ‘Cattle Raid of Cooley’, giving as the late Prof. Kenneth Jackson described ‘a window on the Iron Age’ – in other words, a glimpse into prehistory. What is absent from all these descriptions is a detailed impression of the culture of music and song, although some early evidence on, for example, horns and trumpets, is illuminating. […] In the wider Europe, the bagpipe appears to have spread rapidly in the circumstances of what historians have called the ‘Twelfth Century Renaissance’ when towns and town life, trade and trade routes developed dramatically, and music circulated as part of a minstrel and troubadour culture in the 12th and 13th centuries. At this time Scotland’s and England’s economies began to change radically with the reorganisation of landholding, the beginnings of forms of capitalist farming, and startling innovations detectable in the surviving datable and provenanced material culture, for example in pottery, metalworking and glass. Absent from the material record is anything organological such as pipes or bagpipes. Nothing of the importance and status of the Carnyx, an Iron Age bronze horn, has been recovered in Scotland archaeologically to throw light on the use of woodwind instruments in prehistory. A small ‘whistle’ of brass, 14cm in length, with six finger-holes, was excavated at a site, Tusculum, in North Berwick. A considerable number of ‘Jews Harps’, datable to different periods, have been recovered and provide some material evidence of a rich and protean musical tradition. More specifically three tuning pegs or pins (Scottish Gaelic cnagan) for the Highland harp or clarsach have come from the National Museums of Scotland’s excavations at Finlaggan, Islay, the former centre of the Lordship of the Isles. These items can be dated to the 14th century. The bagpipe must have been played widely throughout Europe, especially in the period from the 12th century, when we first begin to learn more about it, until the 17th century when the pipes began to be displaced in music-making by new orders of instruments. From the 1100s our sources are documentary (then becoming more common), graphic evidence in the form of manuscript illumination with angels, monkeys, rabbits and pigs playing bagpipes, and carvings in stone and wood surviving usually in 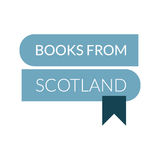 Extract from Bagpipes: A National Collection of a National Instrument

Extract from Bagpipes: A National Collection of a National Instrument