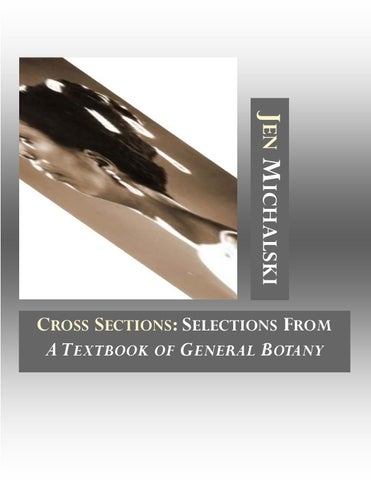 PUBLISHING GENIUS PRODUCES FORWARD-THINKING LITERATURE IN CHAP-FORMAT BOOKS. THE HANDBOUND BOOKS ARE LOVINGLY CRAFTED, PORED OVER AT EVERY STEP IN THE PROCESS, AND GENERALLY COST $4. PUBLISHING GENIUS ALSO RUNS BALTIMORE IS READS, THE OUTDOOR JOURNAL. VISIT ONLINE AT WWW.BALTIMOREISREADS.COM. CROSS SECTIONS IS THE FIFTH EDITION OF THIS PDF CHAPBOOK E-SERIES. VISIT THE WEBSITE FOR THE LATEST INSTALLMENTS. SUBMISSIONS ARE WELCOME YEAR-ROUND. PLEASE VISIT WWW.PUBLISHINGGENIUS.COM/SUBMIT.HTML FOR DETAILS.

VII. ROOTS FIG. 42. Public television/WHUT is having their fundraising drive, which means I get to see Ella Fitzgerald concerts over and over while lying on the couch listening to the rain. Does anyone get tired of hearing "Mack the Knife?" For Christmas, I would like to wake up in 1952 in time to see Ella perform at a club in Harlem. I'll buy a Chesterfield from the cigarette girl and a plain martini in the lobby bar and play with the shiny rhinestone of my handbag through a gloved hand while watching her dab the sweat from her open-sky face. Then, for my birthday I'd like to wake in 1964 or 1965 and see Nina Simone. She'll sing "Feelin' Good" and "See-Line Woman" and "Sinnerman" and it'll be fall and the next day I'll take the train in from Brooklyn and watch the leaves trickle in Central Park, Ninaâ&#x20AC;&#x2122;s voice still sticky in my spine. Then I'll go to the Lincoln Center that night to hear the New York Philharmonic perform Prokofiev's Symphony No. 5. And I'll fall in love with some beautiful woman with slight Russian lineage and faded, bright eyes. She will smile over a program and it will be the only thing we ever share. Will the sum of my life be worth these two, three days? Yes.

FIG. 217. The winds are so strong up here, the crosswinds so dangerous. You'd never know it from the ground, observing this firm accordion span of bridge connecting the two solid masses: One you wish to leave, the other you hope to enter.

FIG. 52. I dreamed we were having a baby, your bubbled front a planet of our chromosomes locked like fingers, slinging our fusion into an orbit of stars like teeth smiling, watching us grow together as her, our sum, our kind wishes, our greatest thoughts, and our deepest fears.

FIG. 309. If I knew I would be free of you, like some false pregnancy, a phantom pain, empty on the radiograph, I should have not lived so gingerly. But how to explain those radiated nights and the morning sickness, the strange desires for your tastes? The knowledge that you would eat me whole and I would allow it? It is all blood and tissue tears in a wastebasket, an antiseptic memory of salt and mucous that brined my skin with sour yearning. But where lies the clinical answer, the sudden discharge of union: did I repel you or, like the child ghosts who sway in the flutter of window curtains, did you simply not want to be born?

XXI. PLANT DISEASES FIG. 255. These are scenes so quietly vicious that the sun tries to escape them . . . perpetual dusksâ&#x20AC;&#x201D;a winding down or screwing up? Scenes that clink frame against frame, burned celluloid, swirling ruby red with cracked edges. We stood very close, limbs entwined, thoughts scattered, and nothing, I thought, could touch the virginity of our dreams. But we wake up always. We wake up.

XXXIV. EVOLUTION FIG. 186. But the curious thing about the whole thing was oddly not curious at all. You see, nothing happened, although everything happened, creating a terrible expectation of everything and nothing, a vortex that swirled inside a vacuum. But if everything cancels nothing, or nothing cancels everything, what is left? Nothing cannot always be the net result, if it is in opposition to everything. Of course, perhaps nothing can be everything. But everything cannot be the net result of nothing. What is left? What is left if there is no longer everything and nothing? Dreams and waking? I suppose what is left is the moon, the stars, the air. Ingredients that are nothing unto themselves awaiting a sufficient spark. There is no plate right now, no main courseâ&#x20AC;&#x201D;merely the intention of eating. The intention of eating will create the need for food and plate. The intention will delineate everything and nothing. Is it time that creates the hunger or is it a determination to be hungry? 7

A NOTE ON CROSS-SECTIONS

Cross-section, n: A section formed by a plane cutting through an object, usually at right angles to an axis. Cross-sections are interesting to me because of their ability to translate important information in a two-dimensional line illustration. For many years cross-sections were the de facto instrument used to model complex systems, particularly in science textbooks and medical journals, before three-dimensional computer and video models were introduced. Despite the limitations of crosssections, they radiate an often-symmetrical, usually abstract beauty. To me, they suggest systems that can translate across different platforms, such as human thoughts or emotions—states that lack a certain physical presence in biological systems. But what if thoughts did create forms? What if emotions or states could be mapped? The cross-sections in this chapbook are actually of plants, taken from A Textbook of General Botany, 4th edition (New York: Macmillan Company, 1949), a book I stole from the research library of a former employer because I loved the illustrations so much. Ironically, although cross-sections have fallen by the wayside except as basic overviews in layperson’s literature, we still hold another twodimensional “illustration” in high regard and believe in its ability to communicate a spectrum of different states, data, and emotion: the written word.

ABOUT THE AUTHOR Jen Michalskiâ&#x20AC;&#x2122;s collection of short fiction, Close Encounters, is available from So New Media (http://sonewpublishing.com). Her work has appeared in more than 30 publications, including McSweeneyâ&#x20AC;&#x2122;s, Failbetter, storySouth, Hobart, Word Riot, and others. She is the editor of the literary ezine JMWW (http://JMWW.150m.com) and lives in Baltimore. You can reach her at jenmichalski.com. 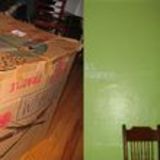 Jen Michalski's story, "Cross Sections: Selections from A Textbook of General Botany" takes the linear mode of cross sections and uses them...

Jen Michalski's story, "Cross Sections: Selections from A Textbook of General Botany" takes the linear mode of cross sections and uses them...