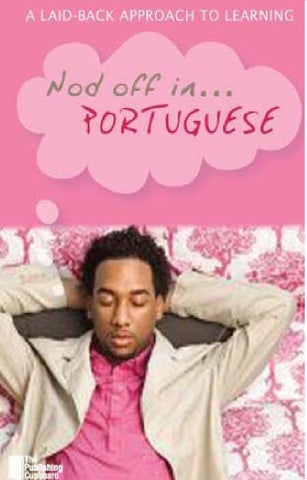 First published in 2009 by The Publishing Cupboard 20 St Vincent Crescent Glasgow G3 8LQ www.publishingcupboard.co.uk Feel free to suggest any subjects you think would benefit from the Nod Off approach.

compiled by Sue Tyson-Ward designed by Fi Steel produced by Peter Rinne presented by Victoria Willing ©The Publishing Cupboard 2009 10 9 8 7 6 5 4 3 2 1 0 All rights reserved. A catalogue entry for this book is available from the British Library. ISBN 978–0–9553294–3–2 Printed in Scotland by Montgomery Litho Group

What is the Nod Off approach?

Some people get tense just thinking about learning – even when it’s something they actually want to learn. Perhaps it’s reawakening bad memories. Unfortunately this tension can act as a barrier to learning. Research has shown that being relaxed is the ideal state for our brains to absorb and understand information and Relax & Learn uses relaxation techniques to put you into the right frame of mind. There’s no pressure to keep up with what is said on the CD, so don’t worry if your mind wanders or if you nod off. Your brain is still listening and taking in the information. Have you ever gone to bed unable to work out the answer to a crossword clue, only to find that you wake up knowing the answer? While you have been asleep your brain has been beavering away. The only bit of ‘homework’ is for you to think up a positive statement. One that focuses on the goal you want to achieve. It could be, ‘I speak Portuguese’. Better still, say it in Portuguese, falo português. This plants a positive message in your subconscious. For it to work, your mind needs to be calm and quiet. The message grows stronger the more you repeat it.

Sleep bubbles contain a short nugget of information or advice that gives a clearer understanding of the language.

And why nod off?

So that you don’t have to rely solely on listening, we have distilled all the information into this booklet. The subject is presented in a logical and confidence-building order. Rather than shy away from grammatical terms, it explains them. We focus on small words – the real key to any language. We also try to help you see connections between English and Portuguese. By listening and referring to the booklet and re-listening, you will get a good basic understanding of Portuguese. At the back of the booklet we give tips on learning a language plus useful websites and other resources for you to move up to a higher level. You can also visit www.publishingcupboard.co.uk where there are further tips, resources and links.

Before you nod off, make a positive statement such as ‘I speak Portuguese’. Better still, say it in Portuguese: falo português.

Only listen to the relaxation track when lying down or in a comfortable chair. Skip it if you are driving a car and go straight to track 3.

Lie on your back – preferably without a pillow. Check that your body is in a straight line from the crown of your head to the point between your heels. Let both feet roll outwards, then your knees, then your thighs. Feel your hips relaxed and open. Have your palms turned upwards, with hands slightly away from your hips – this allows your shoulders to open and relax. The back of your neck should be long – tuck your chin in slightly and this will lengthen it. Sitting Make sure you are sitting in a comfortable chair – one you can relax back in. Have both feet flat on the floor. If your feet don’t reach the ground place a stool or a couple of thick books beneath them. Your feet and knees should be a few inches apart, thighs parallel to the ground. If possible, have your lower back supported with a cushion and sit back. Don’t try to keep your spine too straight. Shoulders should be wide and relaxed. The backs of your hands should be cupped gently on your lap. Check that the back of your neck is long – tuck your chin in slightly to lengthen it.

The quickest way to quieten a busy mind is to focus on your breathing.

Face Your face should feel soft and relaxed. Your jaw muscles should be relaxed. Check for any tension inside your mouth. Your tongue should be soft and relaxed. Check for any tension in your eyes – eyelids should be gently shut, with eyes beneath them soft and smiling. Breathing Breathe in and out through the nose. Keep your focus on your breathing. Become aware of the movement of your chest as your breath fills the lungs. First the chest fills and the rib cage expands. As you exhale, become aware of the lungs emptying and the chest contracting. Feel the slow strong rhythm as breath and movement work together. Awareness Try not to let any ‘outside’ thoughts disturb or distract you. Just focus on your breathing. If you find thoughts intruding, just observe them, don’t get involved in them. Watch them come and watch them go. Nodding Off Don’t worry if your mind wanders or if you fall asleep, your brain is still listening and taking in all the information. Coming out of Relaxation Always end with the final track, (track 18), even if you are only listening to a selection of tracks.

Vowels are a, e, i, o and u (the other letters are consonants). Portuguese vowels have different sounds depending on whether they are stressed or unstressed.

A stressed sound is the one you emphasize when you say a word. Stressed a is pronounced as in cat, unstressed it is ‘uh’. Many Portuguese words end in -a: casa (ca-zuh) Stressed o is pronounced ‘aw’, unstressed it is ‘oo’. Many words end in -o: bolo (baw-loo). The final ‘oo’ sound can get slightly lost when it runs into another word: o bolo delicioso. Stressed e is either ‘eh’ as in café, or ‘ay’ as in inglês (ing-laysh), unstressed it’s more like ‘uh’ as in telefonar (tuh-luh-foo-nar). At the end of a word, -e is barely sounded: chocolate, leite. An i (stressed or not) is usually a short, sharp ‘i’. When followed by a nasal sound, it is more like ‘in’: vinho (veen-yoo), limpo (leem-poo) u (stressed) has mainly an ‘oo’ sound: fruta (froo-tuh) unstressed it is more like ‘uh’: mulher (mul-yair) Nasal sounds Portuguese is quite a nasal language. A squiggle over õ and ã tells you to make them nasal: sounding them towards the back of the nasal area and letting some air out through the nose as you say them: almost as though followed by an ‘n’: pão (pown), estação (esh-tuh-sown), põe (poyn). Vowels followed by m or n are also often nasalized: onde (awn-duh), nunca (noon-kuh), tem (tayn).

Portuguese is fairly straightforward to pronounce once you know a few rules.

The equivalent of English ph is f: farmácia (far-ma-see-yuh), foto (fo-too), telefone (tuh-luh-fon) The letter s An s at the beginning of a word is like the s in ‘sun’: sol (sol), sábado (sa-buh-doo), sete (set) A final -s usually has a shushy sound: casas (ca-zuhsh), computadores (com-pu-ta-dor-ush) An s in the middle of a word has more of a ‘z’ sound: mesa (may-zuh), reserva (re-zer-vuh) An s followed by a t has a ‘ssh’ sound: gosto (gosh-too), estação (esh-tuh-sown) Stress Portuguese is a lovely singsong language.The part of the word you emphasize, or stress, is usually on the secondto-last syllable of a word: chocolate, garagem, or on the final syllable of a word: falar, jornal. If the stress falls elsewhere, there will be a written accent to tell you which part of the word to stress: sábado (sa-buh-doo), inglês (ing-laysh), água (ag-wuh)

Regional accents within Portugal can vary somewhat. And in Brazil, you will hear further differences.

Accents Written accents in Portuguese are there to guide you. They tell you where to stress a word and what sound to make. An accent can also indicate differences in meaning between words that are spelt the same: pára = stop, para = for. An accent can also tell you that a word has combined with another, as in a (to) + a (the) = à, a + as = às.

All things, people, and places are known as nouns. In Portuguese they are grouped as either masculine or feminine words. This is known as the ‘gender’ of the words, and becomes particularly important when you want to use any extra words to describe that noun. Many words have an obvious gender: masculine

The definite article (the) The masculine word for ‘the’ is o, and the feminine one is a. o dedo (the finger) a perna (the leg)

Not all nouns follow these simple rules. Some common ones end in -a but are, in fact, masculine: o dia, o problema, o mapa, o cinema.

Nouns & gender Endings can give some clue as to gender.

-a a casa, a mesa, a praça -ade = English ‘-ity’ a universidade, a realidade, a cidade -ção = English ‘-tion’ a estação, a informação, a tradição

The article is also used with names: o Pedro, a Maria

The plural of nouns ending in a vowel (a e i o u) is formed by simply adding -s to the noun: o carro  os carros a cidade  as cidades a casa  as casas

Languages don’t stick to hard and fast rules, there are always exceptions. But you can still see patterns if you look. These patterns often flow through the whole language from nouns to adjectives to adverbs and so on.

When referring to parents or children, even though this includes a mother or daughter, the masculine plural is used: o pai (father)—os pais (parents) o filho (son)—os filhos (children) Nod off in Portuguese

Relax and learn the language. A 10-minute relaxation session is followed by a clear explanation of how Portuguese works. It doesn't matter i...

Nod off in Portuguese

Relax and learn the language. A 10-minute relaxation session is followed by a clear explanation of how Portuguese works. It doesn't matter i...