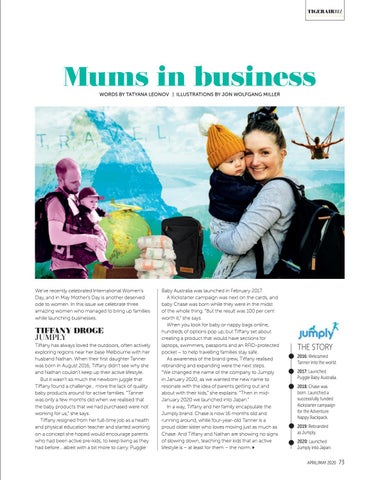 We’ve recently celebrated International Women’s Day, and in May Mother’s Day is another deserved ode to women. In this issue we celebrate three amazing women who managed to bring up families while launching businesses.

TIFFANY DROGE JUMPLY Tiffany has always loved the outdoors, often actively exploring regions near her base Melbourne with her husband Nathan. When their first daughter Tanner was born in August 2016, Tiffany didn’t see why she and Nathan couldn’t keep up their active lifestyle. But it wasn’t so much the newborn juggle that Tiffany found a challenge... more the lack of quality baby products around for active families. “Tanner was only a few months old when we realised that the baby products that we had purchased were not working for us,” she says. Tiffany resigned from her full-time job as a health and physical education teacher and started working on a concept she hoped would encourage parents who had been active pre-kids, to keep living as they had before… albeit with a bit more to carry. Puggle

Baby Australia was launched in February 2017. A Kickstarter campaign was next on the cards, and baby Chase was born while they were in the midst of the whole thing. “But the result was 100 per cent worth it,” she says. When you look for baby or nappy bags online, hundreds of options pop up, but Tiffany set about creating a product that would have sections for laptops, swimmers, passports and an RFID-protected pocket – to help travelling families stay safe. As awareness of the brand grew, Tiffany realised rebranding and expanding were the next steps. “We changed the name of the company to Jumply in January 2020, as we wanted the new name to resonate with the idea of parents getting out and about with their kids,” she explains. “Then in midJanuary 2020 we launched into Japan.” In a way, Tiffany and her family encapsulate the Jumply brand. Chase is now 16 months old and running around, while four-year-old Tanner is a proud older sister who loves moving just as much as Chase. And Tiffany and Nathan are showing no signs of slowing down, teaching their kids that an active lifestyle is – at least for them – the norm. 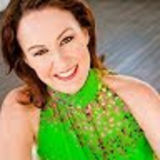 Tigerair Australia is a popular low-cost airline transporting more than 4.5 million passengers around Australia every year.

Tigerair Australia is a popular low-cost airline transporting more than 4.5 million passengers around Australia every year.