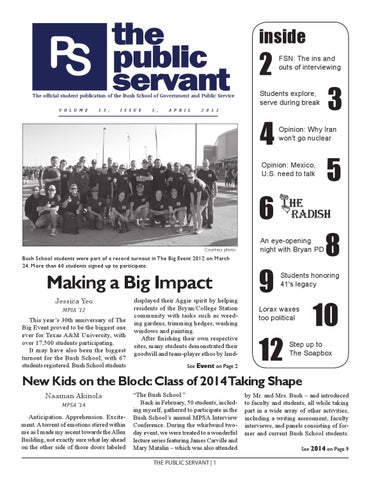 inside the public 2 servant

FSN: The ins and outs of interviewing

Bush School students were part of a record turnout in The Big Event 2012 on March 24. More than 60 students signed up to participate.

This year’s 30th anniversary of The Big Event proved to be the biggest one ever for Texas A&M University, with over 17,500 students participating. It may have also been the biggest turnout for the Bush School, with 67 students registered. Bush School students

displayed their Aggie spirit by helping residents of the Bryan/College Station community with tasks such as weeding gardens, trimming hedges, washing windows and painting. After finishing their own respective sites, many students demonstrated their goodwill and team-player ethos by lendSee Event on Page 2

An eye-opening night with Bryan PD

Step up to The Soapbox

Anticipation. Apprehension. Excitement. A torrent of emotions stirred within me as I made my ascent towards the Allen Building, not exactly sure what lay ahead on the other side of those doors labeled

“The Bush School.” Back in February, 50 students, including myself, gathered to participate in the Bush School’s annual MPSA Interview Conference. During the whirlwind twoday event, we were treated to a wonderful lecture series featuring James Carville and Mary Matalin – which was also attended The Public Servant | 1

by Mr. and Mrs. Bush – and introduced to faculty and students, all while taking part in a wide array of other activities, including a writing assessment, faculty interviews, and panels consisting of former and current Bush School students. See 2014 on Page 9 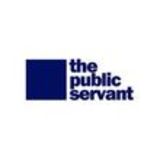