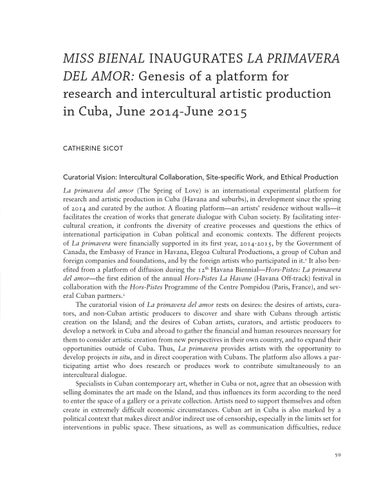 Curatorial Vision: Intercultural Collaboration, Site-specific Work, and Ethical Production La primavera del amor (The Spring of Love) is an international experimental platform for research and artistic production in Cuba (Havana and suburbs), in development since the spring of 2014 and curated by the author. A floating platform—an artists’ residence without walls—it facilitates the creation of works that generate dialogue with Cuban society. By facilitating intercultural creation, it confronts the diversity of creative processes and questions the ethics of international participation in Cuban political and economic contexts. The different projects of La primavera were financially supported in its first year, 2014-2015, by the Government of Canada, the Embassy of France in Havana, Elegoa Cultural Productions, a group of Cuban and foreign companies and foundations, and by the foreign artists who participated in it.1 It also benefited from a platform of diffusion during the 12th Havana Biennial—Hors-Pistes: La primavera del amor—the first edition of the annual Hors-Pistes La Havane (Havana Off-track) festival in collaboration with the Hors-Pistes Programme of the Centre Pompidou (Paris, France), and several Cuban partners.2 The curatorial vision of La primavera del amor rests on desires: the desires of artists, curators, and non-Cuban artistic producers to discover and share with Cubans through artistic creation on the Island; and the desires of Cuban artists, curators, and artistic producers to develop a network in Cuba and abroad to gather the financial and human resources necessary for them to consider artistic creation from new perspectives in their own country, and to expand their opportunities outside of Cuba.  Thus,  La primavera provides artists with the opportunity to develop projects in situ, and in direct cooperation with Cubans. The platform also allows a participating artist who does research or produces work to contribute simultaneously to an intercultural dialogue. Specialists in Cuban contemporary art, whether in Cuba or not, agree that an obsession with selling dominates the art made on the Island, and thus influences its form according to the need to enter the space of a gallery or a private collection. Artists need to support themselves and often create in extremely difficult economic circumstances.  Cuban art in Cuba is also marked by a political context that makes direct and/or indirect use of censorship, especially in the limits set for interventions in public space. These situations, as well as communication difficulties, reduce 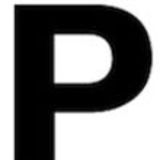