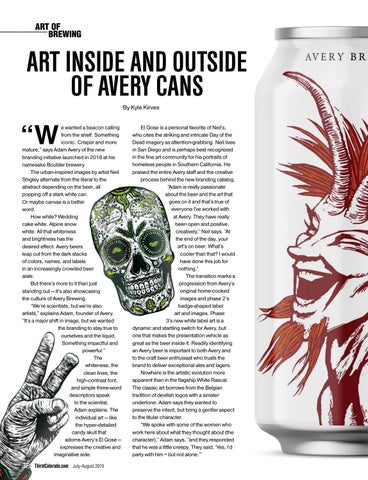 ART INSIDE AND OUTSIDE OF AVERY CANS By Kyle Kirves

e wanted a beacon calling from the shelf. Something iconic. Crisper and more mature,” says Adam Avery of the new branding initiative launched in 2018 at his namesake Boulder brewery. The urban-inspired images by artist Neil Shigley alternate from the literal to the abstract depending on the beer, all popping off a stark white can. Or maybe canvas is a better word. How white? Wedding cake white. Alpine snow white. All that whiteness and brightness has the desired effect: Avery beers leap out from the dark stacks of colors, names, and labels in an increasingly crowded beer aisle. But there’s more to it than just standing out — it’s also showcasing the culture of Avery Brewing. “We’re scientists, but we’re also artists,” explains Adam, founder of Avery. “It’s a major shift in image, but we wanted the branding to stay true to ourselves and the liquid. Something impactful and powerful.” The whiteness, the clean lines, the high-contrast font, and simple three-word descriptors speak to the scientist, Adam explains. The individual art — like the hyper-detailed candy skull that adorns Avery’s El Gose — expresses the creative and imaginative side.

El Gose is a personal favorite of Neil’s, who cites the striking and intricate Day of the Dead imagery as attention-grabbing. Neil lives in San Diego and is perhaps best recognized in the fine art community for his portraits of homeless people in Southern California. He praised the entire Avery staff and the creative process behind the new branding catalog. “Adam is really passionate about the beer and the art that goes on it and that’s true of everyone I’ve worked with at Avery. They have really been open and positive, creatively,” Neil says. “At the end of the day, your art’s on beer. What’s cooler than that? I would have done this job for nothing.” The transition marks a progression from Avery’s original home-cooked images and phase 2’s badge-shaped label art and images. Phase 3’s new white label art is a dynamic and startling switch for Avery, but one that makes the presentation vehicle as great as the beer inside it. Readily identifying an Avery beer is important to both Avery and to the craft beer enthusiast who trusts the brand to deliver exceptional ales and lagers. Nowhere is the artistic evolution more apparent than in the flagship White Rascal. The classic art borrows from the Belgian tradition of devilish logos with a sinister undertone. Adam says they wanted to preserve the intent, but bring a gentler aspect to the titular character. “We spoke with some of the women who work here about what they thought about (the character),” Adam says, “and they responded that he was a little creepy. They said, ‘Yes, I’d party with him – but not alone.’” 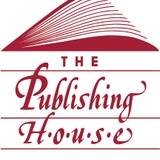 Serving up the Colorado Experience

Serving up the Colorado Experience