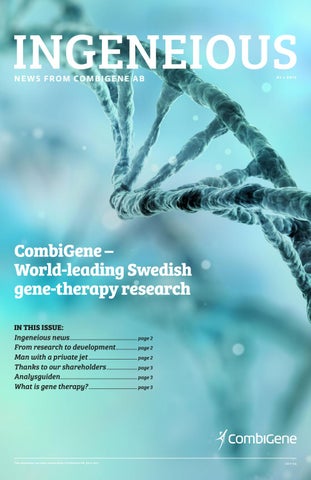 Editorial – Ingeneious keeps you updated � CombiGene is active in

a highly innovative area of medical research and development that will revolutionize treatment methods and improve the quality of life for millions of people. By combining modern neuroscience with recent advances in gene technology, CombiGene AB has developed a method shown in preclinical

Gene therapy presents unique possibilities for treating diseases for which adequate therapies are currently lacking. Throughout the world, intensive research and development work is now being carried out to realize this fantastic potential. As CEO of CombiGene, a company which is at the every forefront of research, I feel a sense of pride and enthusiasm to be a part of this development.

CombiGene’s objective is to develop a treatment method that can improve the quality of life for millions of people.

studies to suppress epileptic seizures. The company’s current focus is on developing this treatment method for the benefit of epilepsy patients, but the method can also be potentially developed for use in the treatment of other neurological diseases. Our intention with Ingeneious is to keep you updated on the company’s journey and development, and to share research findings and successes along the way.

� The target group for CombiGene’s

treatment method is patients with partial (focal or localization-related) epilepsy who are resistant to currently available drugs and who cannot be helped by other treatment alternatives. The size of this group is estimated at as much as 0.3% of the population, which corresponds to about 2.5 million people in the USA and Europe alone.

2016 was the year when we took the step from research to development CombiGene’s objective is to develop a reliable medical treatment for this group of epilepsy patients and during 2016 we took the decisive step from research to development when, in June, entirely according to our original schedule, we were able to choose a candidate drug. In October we took the next important step in the development of the project when we met with Läkemedelsverket (the Swedish Medical Products Agency) for the so-called scientific advice meeting. At the meeting we presented CombiGene’s treatment concept and the preliminary design of the preclinical development programme that must be conducted before our candidate drug can be tested on humans in a Phase I/II study. The meeting was very productive and our concept was well-received by Läkemedelsverket.

our candidate drug has the intended dose-dependent antiepileptic effect. The results of the dose-response study will form the basis of a long-term study to be conducted in 2017/2018.

A stronger CombiGene with a clear direction for 2017 CombiGene’s position as a pharmaceuticals development company has been strengthened significantly, thanks to the choice of a candidate drug and the outcome of the dose-response study. Following the success of 2016, the direction for 2017 is now clearly defined. The new share issue that we

implemented in early 2017 gave us the financial resources necessary for the long-term preclinical study, which is the next important milestone on the path to a finished medicinal drug product. In 2017 we will work towards two main objectives: realization of the long-term study, which we plan to complete during the first half of 2018, and the choice of a GMP manufacturer to make a drug for treating the first patients in a coming Phase-I study. Jan Nilsson CEO, CombiGene AB

Man with a private jet – 20 years too soon “CombiGene’s business is the culmination of my work over the past 20 years. Yes, 20 years have passed since I discovered that a signal substance in the brain, NPY (Neuropeptide Y), stops epilepsy in rats. At that time it was not possible to produce a drug based on the discovery, but it was mentioned in many newspapers in Denmark and internationally, including a paper in the Middle East. News of the discovery had a very

special effect. Several very wealthy Arab men contacted me, one of whom came directly to Copenhagen on his private jet. He called me from the airport and asked if he could come and get a little of the new medicine for epilepsy. I said, ’I am very sorry that you flew all the way here and I hope you have a pleasant evening in Copenhagen. Come back in 20 years...’

Now, 20 years have passed. I am very pleased that CombiGene has given us the chance to do something that will eventually help many people. And it is all because we now have a new technique called gene therapy.” David Woldbye Associate Professor and founder

Analysguiden � In December 2016, the Swedish Shareholders’ Association’s online investors’ guide, Analysguiden, presented an analysis of CombiGene. Below are a few excerpts. Here’s what Analysguiden had to say: Gene therapy is advancing With the help of gene therapy, CombiGene will provide effective treatment of difficult-to-treat neurological diseases. The company’s research is in an exciting but early stage and a capital infusion will soon be needed. During 2016 CombiGene reached an important milestone when the company chose a candidate drug for further development. Smaller preclinical studies have shown strong evidence of the mechanism of action and that the company’s form of gene therapy can deliver the desired genes. However, the preclinical data is still relatively limited. CombiGene will conduct a longer study in a more advanced chronic epilepsy model that can result in preclinical “Proof of Concept” (indication of efficacy). We believe this study will prove to be an important value indicator for the company during 2017. In our view, CombiGene is undervalued compared to other listed companies in a comparable phase of development. However, for a more positive outlook for the share, we would like to see additional financing and more data on the candidate CG01.”

ticals development company that is at the forefront of gene therapy research. The company’s scientific foundation is based on results of research by David Woldbye, Associate Professor at the University of Copenhagen, and Merab Kokaia, Professor of Neurophysiology and head of the Epilepsy Center at Lund University’s Faculty of Medicine. CombiGene is also the only listed gene therapy company in Sweden. Following the final choice of a candidate drug and the successful outcome of a dose-response study in 2016,

CombiGene is now ready to begin a long-term study. Concurrently with the long-term study the company will also select a GMP manufacturer (a company that can manufacture a medical product of the requisite quality for administration to humans). This is so that the drug can be manufactured partly for use in the safety studies that are required by the authorities and partly for treatment of the first patients in a coming Phase-I study. You, the shareholders, make it possible. CombiGene’s board and management would like to take this opportunity to extend a sincere thanks to all

shareholders, old and new, for the confidence you have shown in the company. Together, we are creating conditions for making the world a little better. CombiGene’s focus is currently on developing a drug for treating epilepsy patients, but the company’s technology platform has a much greater potential. Eventually, the company’s treatment concept may have a decisive impact on the treatment of a range of other neurological diseases. CombiGene’s journey has only just begun.

The full text of the analysis is available via a link on CombiGene’s web­ site. See Investor Relations/News, 20 December 2016.

What is gene therapy? � Gene therapy technology is unique

in that it makes it possible to replace defective or missing genes or, in the case of CombiGene’s method, to complement functioning genes with new functions.

of the most exciting areas of development in the pharma industry, thanks to the unique possibilities for precisely targeted therapy and the potential for meeting a very great medical need.

The goal of gene therapy is to treat diseases caused by defective genes by introducing genes with therapeutic effects into the DNA of patients’ cells. Currently, some 2,800 such diseases are known and, for many of them, there are no adequate treatment methods. Gene therapy is one

Unlike conventional drug treatment of chronic diseases, which requires continuous medication, gene therapy has the great advantage of being able to achieve a long-term effect after just one or a few treatments. Significant advances in gene therapy have been made in the past 5-10

years and there is considerable interest in this technology among the major pharmaceutical companies. In Sweden, four gene therapy products have so far been approved for use. Considering the many advantages of gene therapy, and the many research and development projects now under way throughout the world, it is reasonable to assume that the number of approved gene therapy products will continue to grow dramatically over the coming years.

For many sufferers, there is no help – yet. We hope to change this. We are in the process of developing a world-leading method for treating epilepsy. The potential is enormous, the outlook is good. For millions of people worldwide.