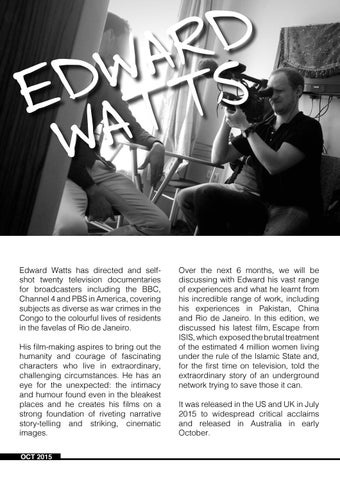 Edward Watts has directed and selfshot twenty television documentaries for broadcasters including the BBC, Channel 4 and PBS in America, covering subjects as diverse as war crimes in the Congo to the colourful lives of residents in the favelas of Rio de Janeiro. His film-making aspires to bring out the humanity and courage of fascinating characters who live in extraordinary, challenging circumstances. He has an eye for the unexpected: the intimacy and humour found even in the bleakest places and he creates his films on a strong foundation of riveting narrative story-telling and striking, cinematic images. OCT 2015

Over the next 6 months, we will be discussing with Edward his vast range of experiences and what he learnt from his incredible range of work, including his experiences in Pakistan, China and Rio de Janeiro. In this edition, we discussed his latest film,â&#x20AC;ŻEscape from ISIS, whichâ&#x20AC;Ż exposed the brutal treatment of the estimated 4 million women living under the rule of the Islamic State and, for the first time on television, told the extraordinary story of an underground network trying to save those it can. It was released in the US and UK in July 2015 to widespread critical acclaims and released in Australia in early October.