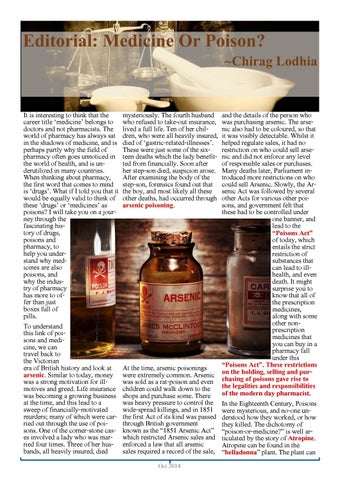 It is interesting to think that the career title ‘medicine’ belongs to doctors and not pharmacists. The world of pharmacy has always sat in the shadows of medicine, and is perhaps partly why the field of pharmacy often goes unnoticed in the world of health, and is underutilized in many countries. When thinking about pharmacy, the first word that comes to mind is ‘drugs’. What if I told you that it would be equally valid to think of these ‘drugs’ or ‘medicines’ as poisons? I will take you on a journey through the fascinating history of drugs, poisons and pharmacy, to help you understand why medicines are also poisons, and why the industry of pharmacy has more to offer than just boxes full of pills. To understand this link of poisons and medicine, we can travel back to the Victorian era of British history and look at arsenic. Similar to today, money was a strong motivation for illmotives and greed. Life insurance was becoming a growing business at the time, and this lead to a sweep of financially-motivated murders; many of which were carried out through the use of poisons. One of the corner-stone cases involved a lady who was married four times. Three of her husbands, all heavily insured, died

mysteriously. The fourth husband who refused to take-out insurance, lived a full life. Ten of her children, who were all heavily insured, died of ‘gastric-related-illnesses’. These were just some of the sixteen deaths which the lady benefitted from financially. Soon after her step-son died, suspicion arose. After examining the body of the step-son, forensics found out that the boy, and most likely all these other deaths, had occurred through arsenic poisoning.

At the time, arsenic poisonings were extremely common. Arsenic was sold as a rat-poison and even children could walk down to the shops and purchase some. There was heavy pressure to control the wide-spread killings, and in 1851 the first Act of its kind was passed through British government known as the “1851 Arsenic Act” which restricted Arsenic sales and enforced a law that all arsenic sales required a record of the sale, Oct 2014

and the details of the person who was purchasing arsenic. The arsenic also had to be coloured, so that it was visibly detectable. Whilst it helped regulate sales, it had no restriction on who could sell arsenic and did not enforce any level of responsible sales or purchases. Many deaths later, Parliament introduced more restrictions on who could sell Arsenic. Slowly, the Arsenic Act was followed by several other Acts for various other poisons, and government felt that these had to be controlled under one banner, and lead to the “Poisons Act” of today, which entails the strict restriction of substances that can lead to illhealth, and even death. It might surprise you to know that all of the prescription medicines, along with some other nonprescription medicines that you can buy in a pharmacy fall under this “Poisons Act”. These restrictions on the holding, selling and purchasing of poisons gave rise to the legalities and responsibilities of the modern day pharmacist. In the Eighteenth Century, Poisons were mysterious, and no-one understood how they worked, or how they killed. The dichotomy of “poison-or-medicine?” is well articulated by the story of Atropine. Atropine can be found in the “belladonna” plant. The plant can

Multi-World-Record Holder Stig Severinsen shares his story, we look at the question 'what is love?' the world of drugs, drug addiction, mass...

Multi-World-Record Holder Stig Severinsen shares his story, we look at the question 'what is love?' the world of drugs, drug addiction, mass...