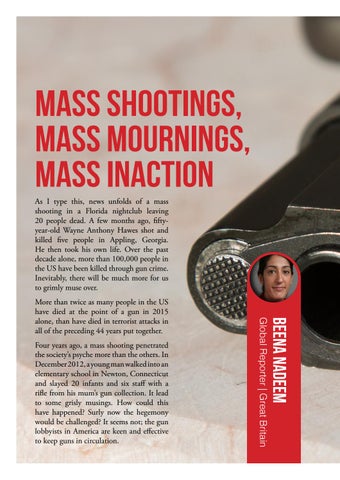 Mass shootings, mass mournings, mass inaction As I type this, news unfolds of a mass shooting in a Florida nightclub leaving 20 people dead. A few months ago, fiftyyear-old Wayne Anthony Hawes shot and killed five people in Appling, Georgia. He then took his own life. Over the past decade alone, more than 100,000 people in the US have been killed through gun crime. Inevitably, there will be much more for us to grimly muse over.

Four years ago, a mass shooting penetrated the societyâ&#x20AC;&#x2122;s psyche more than the others. In December 2012, a young man walked into an elementary school in Newton, Connecticut and slayed 20 infants and six staff with a rifle from his mumâ&#x20AC;&#x2122;s gun collection. It lead to some grisly musings. How could this have happened? Surly now the hegemony would be challenged? It seems not; the gun lobbyists in America are keen and effective to keep guns in circulation.

More than twice as many people in the US have died at the point of a gun in 2015 alone, than have died in terrorist attacks in all of the preceding 44 years put together.

Rights. Responsibilities. Political Correctness. Comedy. Kickboxing. These are just some of the many topics around health and education cove...

Rights. Responsibilities. Political Correctness. Comedy. Kickboxing. These are just some of the many topics around health and education cove...