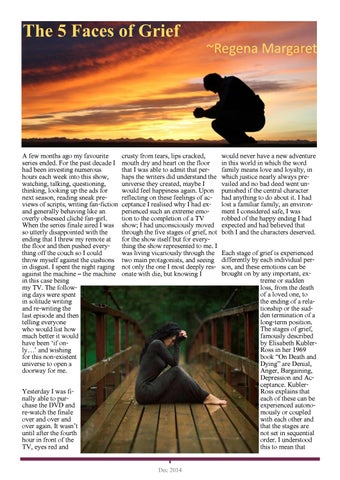 The 5 Faces of Grief

A few months ago my favourite series ended. For the past decade I had been investing numerous hours each week into this show, watching, talking, questioning, thinking, looking up the ads for next season, reading sneak previews of scripts, writing fan-fiction and generally behaving like an overly obsessed cliché fan-girl. When the series finale aired I was so utterly disappointed with the ending that I threw my remote at the floor and then pushed everything off the couch so I could throw myself against the cushions in disgust. I spent the night raging against the machine – the machine in this case being my TV. The following days were spent in solitude writing and re-writing the last episode and then telling everyone who would list how much better it would have been ‘if only…’ and wishing for this non-existent universe to open a doorway for me.

crusty from tears, lips cracked, mouth dry and heart on the floor that I was able to admit that perhaps the writers did understand the universe they created, maybe I would feel happiness again. Upon reflecting on these feelings of acceptance I realised why I had experienced such an extreme emotion to the completion of a TV show; I had unconsciously moved through the five stages of grief, not for the show itself but for everything the show represented to me. I was living vicariously through the two main protagonists, and seeing not only the one I most deeply resonate with die, but knowing I

Yesterday I was finally able to purchase the DVD and re-watch the finale over and over and over again. It wasn’t until after the fourth hour in front of the TV, eyes red and Dec 2014

would never have a new adventure in this world in which the word family means love and loyalty, in which justice nearly always prevailed and no bad deed went unpunished if the central character had anything to do about it. I had lost a familiar family, an environment I considered safe, I was robbed of the happy ending I had expected and had believed that both I and the characters deserved.

Each stage of grief is experienced differently by each individual person, and these emotions can be brought on by any important, extreme or sudden loss, from the death of a loved one, to the ending of a relationship or the sudden termination of a long-term position. The stages of grief, famously described by Elisabeth KublerRoss in her 1969 book “On Death and Dying” are Denial, Anger, Bargaining, Depression and Acceptance. KublerRoss explains that each of these can be experienced autonomously or coupled with each other and that the stages are not set in sequential order. I understood this to mean that

Critically Acclaimed, Emmy-Award Winner and Peabody-Winner Deeyah Khan shares her story and understanding of Gender Inequality whilst our re...

Critically Acclaimed, Emmy-Award Winner and Peabody-Winner Deeyah Khan shares her story and understanding of Gender Inequality whilst our re...