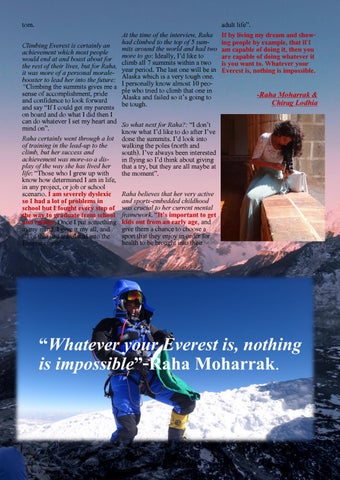 Climbing Everest is certainly an achievement which most people would end at and boast about for the rest of their lives, but for Raha, it was more of a personal moralebooster to lead her into the future: “Climbing the summits gives me a sense of accomplishment, pride and confidence to look forward and say “If I could get my parents on board and do what I did then I can do whatever I set my heart and mind on”. Raha certainly went through a lot of training in the lead-up to the climb, but her success and achievement was more-so a display of the way she has lived her life: “Those who I grew up with know how determined I am in life, in any project, or job or school scenario. I am severely dyslexic so I had a lot of problems in school but I fought every step of the way to graduate from school and college. Once I put something in my mind, I give it my all, and all of that just translated into the Everest climb”.

adult life”. At the time of the interview, Raha If by living my dream and showhad climbed to the top of 5 sum- ing people by example, that if I mits around the world and had two am capable of doing it, then you more to go: Ideally, I’d like to are capable of doing whatever it climb all 7 summits within a two is you want to. Whatever your year period. The last one will be in Everest is, nothing is impossible. Alaska which is a very tough one. I personally know almost 10 people who tried to climb that one in -Raha Moharrak & Alaska and failed so it’s going to Chirag Lodhia be tough. So what next for Raha?: “I don’t know what I’d like to do after I’ve done the summits. I’d look into walking the poles (north and south). I’ve always been interested in flying so I’d think about giving that a try, but they are all maybe at the moment”. Raha believes that her very active and sports-embedded childhood was crucial to her current mental framework. “It’s important to get kids out from an early age, and give them a chance to choose a sport that they enjoy in order for health to be brought into their

Raha Moharrak and James Saward-Anderson share their stories of climbing Everest and running from London-to-Rome in PTW Magazine. Health, edu...

Raha Moharrak and James Saward-Anderson share their stories of climbing Everest and running from London-to-Rome in PTW Magazine. Health, edu...