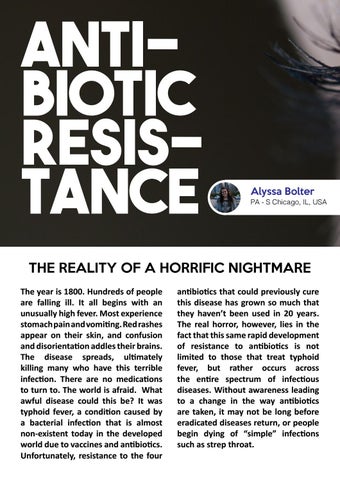 THE REALITY OF A HORRIFIC NIGHTMARE The year is 1800. Hundreds of people are falling ill. It all begins with an unusually high fever. Most experience stomach pain and vomiting. Red rashes appear on their skin, and confusion and disorientation addles their brains. The disease spreads, ultimately killing many who have this terrible infection. There are no medications to turn to. The world is afraid. What awful disease could this be? It was typhoid fever, a condition caused by a bacterial infection that is almost non-existent today in the developed world due to vaccines and antibiotics. Unfortunately, resistance to the four

antibiotics that could previously cure this disease has grown so much that they haven’t been used in 20 years. The real horror, however, lies in the fact that this same rapid development of resistance to antibiotics is not limited to those that treat typhoid fever, but rather occurs across the entire spectrum of infectious diseases. Without awareness leading to a change in the way antibiotics are taken, it may not be long before eradicated diseases return, or people begin dying of “simple” infections such as strep throat.