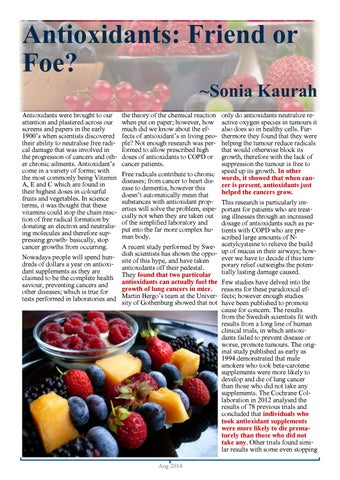 Antioxidants were brought to our attention and plastered across our screens and papers in the early 1900’s when scientists discovered their ability to neutralise free radical damage that was involved in the progression of cancers and other chronic ailments. Antioxidant’s come in a variety of forms; with the most commonly being Vitamin A, E and C which are found in their highest doses in colourful fruits and vegetables. In science terms, it was thought that these vitamins could stop the chain reaction of free radical formation by donating an electron and neutralising molecules and therefore suppressing growth- basically, stop cancer growths from occurring. Nowadays people will spend hundreds of dollars a year on antioxidant supplements as they are claimed to be the complete health saviour, preventing cancers and other diseases; which is true for tests performed in laboratories and

the theory of the chemical reaction when put on paper; however, how much did we know about the effects of antioxidant’s in living people? Not enough research was performed to allow prescribed high doses of antioxidants to COPD or cancer patients. Free radicals contribute to chronic diseases; from cancer to heart disease to dementia, however this doesn’t automatically mean that substances with antioxidant properties will solve the problem, especially not when they are taken out of the simplified laboratory and put into the far more complex human body. A recent study performed by Swedish scientists has shown the opposite of this hype, and have taken antioxidants off their pedestal. They found that two particular antioxidants can actually fuel the growth of lung cancers in mice. Martin Bergo’s team at the University of Gothenburg showed that not

only do antioxidants neutralize reactive oxygen species in tumours it also does so in healthy cells. Furthermore they found that they were helping the tumour reduce radicals that would otherwise block its growth, therefore with the lack of suppression the tumour is free to speed up its growth. In other words, it showed that when cancer is present, antioxidants just helped the cancers grow. This research is particularly important for patients who are treating illnesses through an increased dosage of antioxidants such as patients with COPD who are prescribed large amounts of Nacetylcysteine to relieve the build up of mucus in their airways; however we have to decide if this temporary relief outweighs the potentially lasting damage caused. Few studies have delved into the reasons for these paradoxical effects; however enough studies have been published to promote cause for concern. The results from the Swedish scientists fit with results from a long line of human clinical trials, in which antioxidants failed to prevent disease or worse, promote tumours. The original study published as early as 1994 demonstrated that male smokers who took beta-carotene supplements were more likely to develop and die of lung cancer than those who did not take any supplements. The Cochrane Collaboration in 2012 analysed the results of 78 previous trials and concluded that individuals who took antioxidant supplements were more likely to die prematurely than those who did not take any. Other trials found similar results with some even stopping