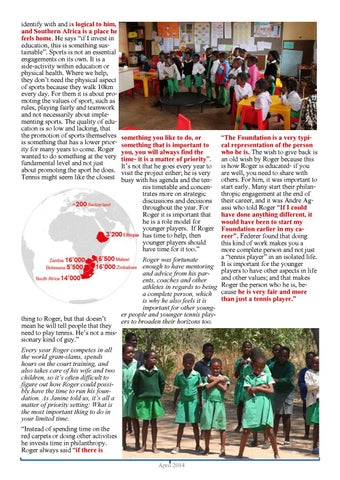 identify with and is logical to him, and Southern Africa is a place he feels home. He says “if I invest in education, this is something sustainable”. Sports is not an essential engagements on its own. It is a side-activity within education or physical health. Where we help, they don’t need the physical aspect of sports because they walk 10km every day. For them it is about promoting the values of sport, such as rules, playing fairly and teamwork and not necessarily about implementing sports. The quality of education is so low and lacking, that the promotion of sports themselves is something that has a lower priority for many years to come. Roger wanted to do something at the very fundamental level and not just about promoting the sport he does. Tennis might seem like the closest

something you like to do, or something that is important to you, you will always find the time- it is a matter of priority”. It’s not that he goes every year to visit the project either; he is very busy with his agenda and the tennis timetable and concentrates more on strategic discussions and decisions throughout the year. For Roger it is important that he is a role model for younger players. If Roger has time to help, then younger players should have time for it too.” Roger was fortunate enough to have mentoring and advice from his parents, coaches and other athletes in regards to being a complete person, which is why he also feels it is important for other younger people and younger tennis plaything to Roger, but that doesn’t ers to broaden their horizons too. mean he will tell people that they need to play tennis. He’s not a missionary kind of guy.” Every year Roger competes in all the world gram-slams, spends hours on the court training, and also takes care of his wife and two children, so it’s often difficult to figure out how Roger could possibly have the time to run his foundation. As Janine told us, it’s all a matter of priority setting: What is the most important thing to do in your limited time. “Instead of spending time on the red carpets or doing other activities he invests time in philanthropy. Roger always said “if there is April 2014

“The Foundation is a very typical representation of the person who he is. The wish to give back is an old wish by Roger because this is how Roger is educated- if you are well, you need to share with others. For him, it was important to start early. Many start their philanthropic engagement at the end of their career, and it was Andre Agassi who told Roger “If I could have done anything different, it would have been to start my Foundation earlier in my career”. Federer found that doing this kind of work makes you a more complete person and not just a “tennis player” in an isolated life. It is important for the younger players to have other aspects in life and other values; and that makes Roger the person who he is, because he is very fair and more than just a tennis player.”