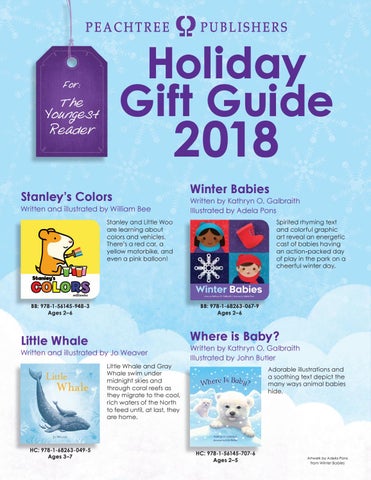 Stanley and Little Woo are learning about colors and vehicles. There’s a red car, a yellow motorbike, and even a pink balloon!

Spirited rhyming text and colorful graphic art reveal an energetic cast of babies having an action-packed day of play in the park on a cheerful winter day.

Little Whale and Gray Whale swim under midnight skies and through coral reefs as they migrate to the cool, rich waters of the North to feed until, at last, they are home.

Adorable illustrations and a soothing text depict the many ways animal babies hide.

In this subversive and deliciously wicked retelling, Willow is a good witch, who only uses good magic—until she meets Hansel and Gretel.

This modern remix of the beloved fairy tale delivers a freshly humorous take on one prince’s search for the just-right girl of his dreams.

The Boy Who Cried Ninja

Written and illustrated by Alex Latimer

In this quirky twist, Tim’s outrageous excuses turn out to have an unexpected element of truth.

When Mary McBlinken the pairie chicken hears a rumblin’ and a grumblin’, she sets off to warn her friends.

In the Snow Written by Elizabeth Spurr Illustrated by Manelle Oliphant Simple and evocative language and charming illustrations describe a girl’s experience on a snowy day as she makes a snowman, sleds, and has other winter fun!

The Santa Trap Written by Jonathan Emmett Illustrated by Poly Bernatene When Santa Claus refuses to give him anything but socks, Bradley vows to get revenge. If Santa won’t give him the gifts he wants, Bradley will just have to transforms his house into a trap.

Little Rabbit’s Christmas Written and illustrated by Harry Horse Little Rabbit received the perfect Christmas present: a lovely red sled. But can he learn to share?

Santa’s Last Present Written by Marie-Aude Murail &amp; Elvire Murail Illustrated by Quentin Blake Julian thinks he’s getting too big to believe in Santa, but when he ﬁnds an extra present under the tree, he discovers that he may not be too old after all.

Yours for Justice, Ida B. Wells

With a deep belief in America’s promise of “freedom and justice for all,” young Ida deﬁed society’s conventions and used her position as a journalist to speak against injustice and be a tireless crusader for civil rights.

Dangerous Jane Written by Suzanne Slade Illustrated by Alice Ratterree For twenty-ﬁve years, Jane Addams had helped people live in peace at Hull House. But when war broke out, she decided to take on the world and become a dangerous woman for the sake of peace.

Fault Lines in the Constitution The Framers, Their Fights, and the Flaws that Affect Us Today Written by Cynthia Levinson &amp; Sanford Levinson The Levinsons take readers back to the creation of the US Constitution and discuss how contemporary problems were ﬁ rst introduced—then they offer possible solutions.

Marching with Aunt Susan Susan B. Anthony and the Fight for Women’s Suffrage Written by Claire Rudolf Murphy Illustrated by Stacey Schuett

Stirred to action when Susan B. Anthony comes to town to help lead the campaign for women’s suffrage, Bessie joins the movement and discovers that small efforts can result in small changes—and maybe even big ones.

Izzy Gizmo’s inventions are marvelous, but often malfunction. When she ﬁnds a crow with a broken wing, she just has to help! Izzy tries again and again to build a new pair of wings, but nothing is working. Can Izzy overcome her failures? HC: 978-1-68263-021-1 Ages 4–8

In 1961, President Kennedy announced that the US would try to land a man on the Moon. During the 2979 days that followed his speech, 18 astronauts climbed into spaceships, eight rockets soared into space, and 400,000 people—engineers, technicians, scientists, mathematicians, and machinists—joined Project Apollo in hopes of making the dream a reality.

Instead of joining the swim team like he told his uncle, Jonah hangs around the local marina working on boat motors, hoping to buy his own motorboat one day. When budding marine biologist Sumi asks him to be her research assistant, he jumps at the chance to make some money. But soon he will have to face his greatest fears and give up his secrets forever.

Ebenezer Has a Word for Everything Written by Chelsea H. Rowe Illustrated by Frank Dormer No one seems to understand Ebenezer’s word collections, but his efforts are ﬁnally appreciated when he meets Fitzgerald. Fitzgerald doesn’t have a word collection—but he does have lots of ideas. Together, they can make stories.

The Joneses have just won the Great Montgomery Book Emporium in a contest, and it’s every book lover’s dream! But the previous owner is hiding something that could destroy absolutely everything for the Joneses. Property Jones has a whopper of a secret too— and it might just be the key to saving her family and their bookshop from the clutches of a nasty villain.

In this playful homage to Charles Dickens, unlikely allies learn the lessons of a great friendship.

This ﬁctionalized ﬁ rst-person biography in verse follows the early years of the child who grows up to pen Don Quixote, the ﬁ rst modern novel.

Find the perfect book for everyone on your gift list this year!