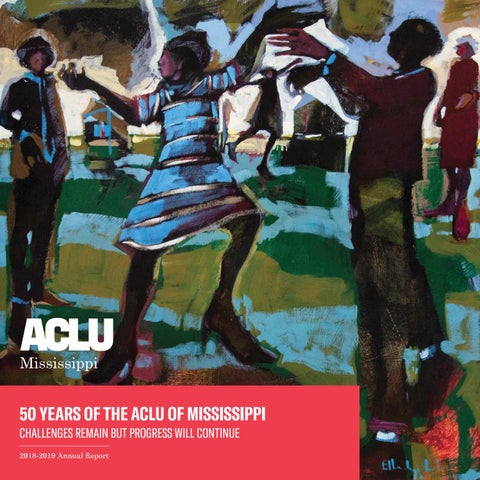 ACLU-MS BOARD OF DIRECTORS

Director of Communications and Advocacy

Director of Operations and Administration

A MESSAGE FROM THE BOARD PRESIDENT AND THE INTERIM EXECUTIVE DIRECTOR

50-YEAR ANNIVERSARY We turned 50-years-old in 2019. The ACLU of Mississippi first opened its doors in 1969. When we were founded, women, blacks, gays and lesbians, and other minority communities were fighting for equal rights. Fifty years later, these fights continue.

THE FIGHT FOR EQUALITY CONTINUES The Supreme Court established a womanâ&#x20AC;&#x2122;s right to choose what to do with her body and whether to maintain a pregnancy 46 years ago. 2019 saw some of the greatest attacks on that right since it was established. Mississippi passed a law that banned abortions at six weeks, a time before most women know they are pregnant. Mississippiâ&#x20AC;&#x2122;s dark history regarding race manifests itself today in many ways, including in our mass incarceration crisis. Our state imprisons people at the third highest rate in the country and disproportionately does so to blacks. The backlash to marriage equality was swift and harsh. In 2016 Mississippi passed the most discriminatory anti-LGBTQ law in the country, and it remains on the books today. Under that law, HB 1523, a foster parent can force a child into conversion therapy, a school counselor may refuse to counsel a gay child, and a doctor can refuse to treat someone because they are lesbian.

WE CELEBRATE OUR VICTORIES While challenges remain, much progress, of course, has been made over the past 50 years, including in 2019. This year, along with our partners at Simpson, Thacher & Bartlett and the National ACLU, we settled a lawsuit against the Madison County Sheriffâ&#x20AC;&#x2122;s Department for its decades of racially discriminatory policing. As a result of the settlement, countless black residents of Madison County no longer have to show their papers before they can go home or to work. It was a long-standing practice for the Madison County Sheriff to set up checkpoints at the only entrance and exit to predominantly black apartment complexes. We ended this discriminatory practice. Cities and towns across Mississippi use panhandling ordinances to move homeless people out of sight instead of addressing the underlying causes. Some cities also use these laws to abuse, beat, rob, and threaten the homeless. Asking for money in a public place, however, is a constitutional right protected by the First Amendment. Through our advocacy, the ACLU of Mississippi has worked with eight cities in the state to repeal these unconstitutional and discriminatory laws. While whites and blacks have comparable usage

President ACLU-MS Board of Directors

WE WIN BY WORKING TOGETHER This is just a sample of the work the ACLU of Mississippi has done, and we do it together with our members, partners, and supporters across the state and nation. We strive to speak for the voiceless and to make our state a more fair and just place. Much work remains to be done, and we look forward to continuing our fight for justice.

A groundbreaking consent decree will help to prevent the Madison County Sheriff’s Department from engaging in the racially motivated policing practices that have historically been its hallmark. The class-action lawsuit initially filed by us along with our partners at the American Civil Liberties Union and the law firm Simpson Thacher & Bartlett LLP aimed to challenge Madison County’s unconstitutional policing tactics. “The Court’s order affirms the simple but fundamental proposition – that in America police must treat everyone the same regardless of race,” said Joshua Tom, Legal Director and Interim Executive Director of the ACLU of Mississippi. Brown vs. Madison County is groundbreaking, in that it is one of the first consent decrees in the state of Mississippi to address racialized policing. At the time of the suit’s filing, black individuals were almost five times more likely than white people to be arrested in Madison County. “When the Madison County Sheriff’s Department forced their way into my house and choked my disabled husband, they stole a piece of our

humanity,” said Quinnetta Manning, a Madison County resident and named plaintiff in the lawsuit. “I know that every American citizen has rights, but the Madison County Sheriffs treated us as though we didn’t and made us feel less than American. I believe that this settlement agreement is not only a necessary step in reforming MCSD, but a necessary step in returning humanity to the black residents of Madison County.” This settlement came only after more than two years of intensive litigation. “The settlement contains provisions that will help ensure effective policing coupled with compliance with the protections of the United States Constitution,” said Jonathan Youngwood, a partner at Simpson Thacher & Bartlett. “This positive resolution illustrates the power of effective federal litigation before an independent judiciary.”

Court’s order affirms the “ The simple but fundamental proposition – that in America police must treat everyone the same regardless of race.

THE FIGHT FOR EQUALITY CONTINUES

Mississippians deserve the right to “ All exercise their freedom of speech, and

those in need absolutely deserve the right to ask for help.

VICTORY: REPEAL DISCRIMINATORY PANHANDLING ORDINANCES This year, the ACLU of Mississippi, in a letter nationally coordinated by the National Law Center on Homelessness & Poverty, relaunched a campaign demanding that 16 jurisdictions in Mississippi repeal their bans on panhandling. The campaign, #IAskForHelpBecause, was a follow-up to last year’s Housing Not Handcuffs campaign. Since the 2015 Supreme Court decision in Reed vs. Town of Gilbert secured heightened protections for free speech, every case brought against panhandling ordinances – more than 35 to date, including many with language similar to what is found in these 16 Mississippi towns and cities – has been found unconstitutional. The letter by the ACLU of Mississippi was part of a coordinated effort among

15 organizations in 11 states targeting more than 175 similarly outdated ordinances. To date, a total of 20 Mississippi municipalities have been asked to repeal their panhandling ordinances. Among the 20 cities to receive a letter, 8 have repealed their panhandling ordinances. These cities include Meridian, Olive Branch, Ridgeland, Starkville, Vicksburg, Pascagoula, Brandon, and Corinth. There are still cities that refuse to remove these unconstitutional laws from their books, and the ACLU of MS is exploring litigation against particularly egregious ordinances to protect the rights of Mississippi’s citizens. Criminalizing a person for simply asking for help is inefficient and only prolongs homelessness. All Mississippians deserve the right to exercise their freedom of speech, and those in need absolutely deserve the right to ask for help.

VICTORY: DECRIMINALIZING MARIJUANA Despite comparable usage rates, blacks are almost four times more likely than whites to be arrested for marijuana. Unequal enforcement of drug laws combined with over-reliance on policing and incarceration as a cure-all for crime, poverty, mental illness, and addiction have resulted in America’s mass incarceration crisis that disproportionately impacts black and brown people. Mississippi is one of the nation’s leading incarcerators with the third highest rate in the nation. The need to change these ineffective and destructive policies is clear. Many states have moved in the right direction by legalizing marijuana either for medical or recreational use and decriminalizing some marijuana possessions. While Mississippi remains entrenched in its tough-on-crime mentality, there is reason for hope. Hattiesburg passed an ordinance decriminalizing first-time possession of marijuana, following a similar ordinance enacted in Jackson. Mississippi voters will decide whether to permit medical marijuana via ballot initiative in 2020.

is one of the nation’s “ Mississippi leading incarcerators with the

third highest rate in the nation.

ICE RAIDS In the largest workplace raid in American history, ICE rounded up and detained more than 680 members of our communities, putting families in immediate crisis. Hundreds of children returned from their first day of school only to find that their parents had been locked up. We, along with more than two dozen organizations, formed the Mississippi Immigration Coalition to help the families affected by the raids. The Coalitionâ&#x20AC;&#x2122;s help includes legal advice and representation; community, family, and mental health services; and humanitarian aid. As of November 2019, $298,905 has been sent to help 223 families with rent, utilities, medicine, and health care. The devastation that resulted from these raids is a direct result of the Trump administrationâ&#x20AC;&#x2122;s extreme immigration policies, which make no one safer in Mississippi and came at no Mississippianâ&#x20AC;&#x2122;s urging.

VOTER RIGHTS Mississippiâ&#x20AC;&#x2122;s history on voting is notorious. Mississippi remains a state that imposes unnecessary obstacles to the polls. Unlike the majority of states, Mississippi does not allow early voting and has cumbersome absentee voting requirements that hinder eligible voters from voting. We have joined with our partner organizations across the state and country to push for common-sense, well-accepted reforms to ease access to the polls while continuing to educate voters across the state about their voting rights. The ACLU of Mississippi is dedicated to promoting, defending, and extending civil liberties to all Mississippians with emphasis on issues re...

The ACLU of Mississippi is dedicated to promoting, defending, and extending civil liberties to all Mississippians with emphasis on issues re...