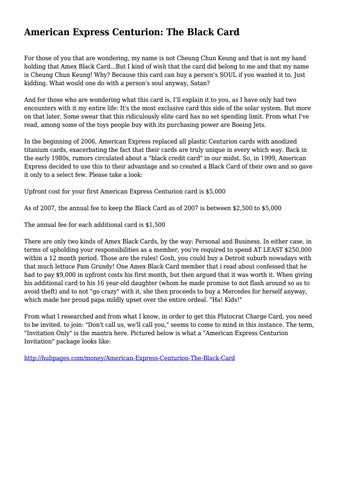 American Express Centurion: The Black Card For those of you that are wondering, my name is not Cheung Chun Keung and that is not my hand holding that Amex Black Card...But I kind of wish that the card did belong to me and that my name is Cheung Chun Keung! Why? Because this card can buy a person&#39;s SOUL if you wanted it to. Just kidding. What would one do with a person&#39;s soul anyway, Satan? And for those who are wondering what this card is, I&#39;ll explain it to you, as I have only had two encounters with it my entire life: It&#39;s the most exclusive card this side of the solar system. But more on that later. Some swear that this ridiculously elite card has no set spending limit. From what I&#39;ve read, among some of the toys people buy with its purchasing power are Boeing Jets. In the beginning of 2006, American Express replaced all plastic Centurion cards with anodized titanium cards, exacerbating the fact that their cards are truly unique in every which way. Back in the early 1980s, rumors circulated about a &quot;black credit card&quot; in our midst. So, in 1999, American Express decided to use this to their advantage and so created a Black Card of their own and so gave it only to a select few. Please take a look: Upfront cost for your first American Express Centurion card is $5,000 As of 2007, the annual fee to keep the Black Card as of 2007 is between $2,500 to $5,000 The annual fee for each additional card is $1,500 There are only two kinds of Amex Black Cards, by the way: Personal and Business. In either case, in terms of upholding your responsibilities as a member, you&#39;re required to spend AT LEAST $250,000 within a 12 month period. Those are the rules! Gosh, you could buy a Detroit suburb nowadays with that much lettuce Pam Grundy! One Amex Black Card member that i read about confessed that he had to pay $9,000 in upfront costs his first month, but then argued that it was worth it. When giving his additional card to his 16 year-old daughter (whom he made promise to not flash around so as to avoid theft) and to not &quot;go crazy&quot; with it, she then proceeds to buy a Mercedes for herself anyway, which made her proud papa mildly upset over the entire ordeal. &quot;Ha! Kids!&quot; From what I researched and from what I know, in order to get this Plutocrat Charge Card, you need to be invited. to join: &quot;Don&#39;t call us, we&#39;ll call you,&quot; seems to come to mind in this instance. The term, &quot;Invitation Only&quot; is the mantra here. Pictured below is what a &quot;American Express Centurion Invitation&quot; package looks like: http://hubpages.com/money/American-Express-Centurion-The-Black-Card