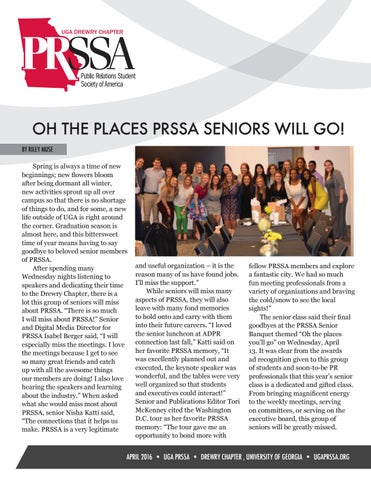 OH THE PLACES PRSSA SENIORS WILL GO! BY RILEY MUSE Spring is always a time of new beginnings; new flowers bloom after being dormant all winter, new activities sprout up all over campus so that there is no shortage of things to do, and for some, a new life outside of UGA is right around the corner. Graduation season is almost here, and this bittersweet time of year means having to say goodbye to beloved senior members of PRSSA. After spending many Wednesday nights listening to speakers and dedicating their time to the Drewry Chapter, there is a lot this group of seniors will miss about PRSSA. “There is so much I will miss about PRSSA!” Senior and Digital Media Director for PRSSA Isabel Berger said, “I will especially miss the meetings. I love the meetings because I get to see so many great friends and catch up with all the awesome things our members are doing! I also love hearing the speakers and learning about the industry.” When asked what she would miss most about PRSSA, senior Nisha Katti said, “The connections that it helps us make. PRSSA is a very legitimate

and useful organization – it is the reason many of us have found jobs. I’ll miss the support.” While seniors will miss many aspects of PRSSA, they will also leave with many fond memories to hold onto and carry with them into their future careers. “I loved the senior luncheon at ADPR connection last fall,” Katti said on her favorite PRSSA memory, “It was excellently planned out and executed, the keynote speaker was wonderful, and the tables were very well organized so that students and executives could interact!” Senior and Publications Editor Tori McKenney cited the Washington D.C. tour as her favorite PRSSA memory: “The tour gave me an opportunity to bond more with

fellow PRSSA members and explore a fantastic city. We had so much fun meeting professionals from a variety of organizations and braving the cold/snow to see the local sights!” The senior class said their final goodbyes at the PRSSA Senior Banquet themed “Oh the places you’ll go” on Wednesday, April 13. It was clear from the awards ad recognition given to this group of students and soon-to-be PR professionals that this year’s senior class is a dedicated and gifted class. From bringing magnificent energy to the weekly meetings, serving on committees, or serving on the executive board, this group of seniors will be greatly missed.

The Olympic Games are the world’s most prominent and well recognized sporting event. Thousands of athletes from around the world come together to participate in a variety of events. Through the spirit of healthy competition, the Olympics bring the people of this world together in a band of unity. The rich history combined with our human nature for competition and sport combine to create this extraordinary event shared by millions around the world. Because The Olympic Games are loved by so many, marketers and advertisers have been preparing for the 2016 Summer Olympic Games in Rio de Janeiro for quite some time. The Olympics have one of the largest television audiences in history. According to the London 2012 Olympic Games Global Broadcast Report, there were a total of 27.9 billion hours of London 2012 television coverage watched by all viewers globally. Different brands from all around the world use this opportunity to launch public relations campaigns specifically designed for The Olympic Games. When Rio de Janeiro beat Tokyo, Madrid, and Chicago in the vote for where the next Olympics were to be held, Brazil’s economy was growing. This was in 2009 when the decision to hold the Games in Rio was a celebration of their political stability and ability to host such a global event. The President of Brazil at the time, Luiz APRIL 2016

Inácio Lula da Silva said that the Games would boost the country’s economy and strength as a whole. Today, Brazil is facing corruption and scandal. President Dilma Rousseff is expected to be impeached, the country has fallen into a recession, and officials are dealing with the Zika virus. Many of the Olympic sponsors and partners around the world are concerned. “Our client contacts have been shifting the emphasis of their promotions from inside the country to outside Brazil, where they feel they can obtain a better return on their substantial Olympic investment,” says Steve Madincea, founder and group MD at London-based PR and sports marketing firm, PRISM. CSR, Corporate Social Responsibility, is going to be a big topic of conversation for the upcoming Games. Brazil is facing challenges including poverty, infrastructure and public health issues. Sponsors are expected to heavily communicate the CSR components of their Olympic plans. For example, GE has created a tradition of donating technology and solutions to the host city or country that provide real benefit to the people. Nissan, another Olympic sponsor, is launching a mentorship program as a part of its partnership with The 2016 Olympic Games. Additionally, brands are conducting extensive media and crisis management training. In preparation for crisis or scandal, all spon-

sors have plans in place for any risk that could come from their involvement with the Olympics in Rio. “What is happening in Rio is something brands have to keep an eye on, but at the end of day, the Games will proceed,” points out Steve Hickok, Senior Vice President, partner, and global sports co-lead at FleishmanHillard. “The sponsors who are ultimately able to protect their investment and amplify it will be the ones that succeed.” Regardless of the concerns about Brazil and the country’s current troubles, it is safe to say the 2016 Summer Olympics will still be an amazing and eventful camaraderie of athletes around the world. As for the UGA public relations community, we will be on the edge of our seats as we watch for possible crisis management opportunities from which to learn from, but also cheering on Team USA!

GAINING EXPERIENCE THROUGH GRADY AND PRSSA MENTORSHIPS BY ERIN SHATTLES

No matter what degree of study a student is working to earn from The University of Georgia, there are a countless number of opportunities beneficial to one`s college career that come in addition to one`s degree while attending UGA. These opportunities are enormous and include various activities through numerous organizations. Among these beneficial activities include mentor-mentee programs. Both Grady College and UGA`s John E. Drewry Chapter of Public Relations Student Society of America have mentor-mentee programs in place that have been successful in providing and establishing lasting relationships between students and professionals. Part of what can make a person so great at what they do is experience. However, while attending college, most students have not yet gained experience in a workforce that may resemble that of their future career. Students typically have a general idea of the direction in which the career they plan to pursue will lead them, but additional guidance may be needed to help students decide what the best area of emphasis for their desired career path may be. Students may need detailed instruction on how to format and organize their resume, advice on which internship to take where and what to expect or not expect in the day of a life of a professional in their chosen career path. Because of this need for a better understanding, Grady and UGA`s PRSSA are among top

colleges and organizations that recognize this and aim to implement programs that present opportunities before students in assisting them in the most beneficial ways possible. The establishment of mentor-mentee programs through both is one way in which this is demonstrated. Junior Grady student, Lyndsey Yates, has participated in Grady`s mentor-mentee program since December. Paired with a mentor who “is on the other side of the country,” Yates explains that the relationship has provided her with “a great experience through which my mentor has been able to give me great advice in the industry, as well as notify me of internship opportunities.” With matching systems that help place a student under a professional who is willing and has agreed to be a mentor to a current student, mentor-mentee partnerships are established based on similar career interests, goals, experiences, likes, dislikes and beyond in hopes that a connection will be made. It is assumed that through this on-going relationship that students will ask as many questions as they would like to have answers to and the professional would give the best advice based off of experience that students may not yet have obtained. No matter the questions asked or guidance needed, a participating mentor will be there to help guide and give the best future career suggestions and encouragement possible. For Grady students and members of UGA`s PRSSA, consider being apart of a mentor-mentee program next school year.

WHERE IN THE WORLD IS THIS SUMMER TAKING US? BY TORI MCKENNEY

PRSSA is home to some tallented and hard working dawgs! Instead of lounging by the pool, many students continue to push themselves with learning opportunities and gaining new, valuable experiences. Three of the most common avenues for this growth are internships, jobs, and studying abroad taking places across the globe. Check out just a sample of the incredible things our members will be doing between May and August! 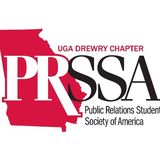