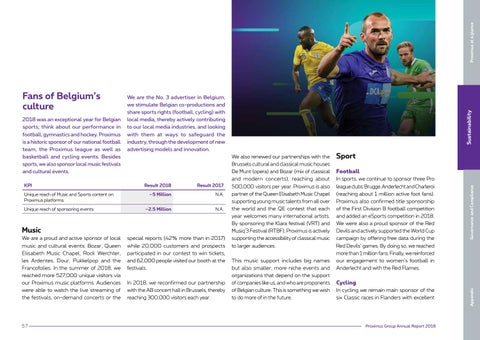 Proximus at a glance

Music We are a proud and active sponsor of local music and cultural events: Bozar, Queen Elisabeth Music Chapel, Rock Werchter, les Ardentes, Dour, Pukkelpop and the Francofolies. In the summer of 2018, we reached more 527,000 unique visitors via our Proximus music platforms. Audiences were able to watch the live streaming of the festivals, on-demand concerts or the

special reports (42% more than in 2017) while 20,000 customers and prospects participated in our contest to win tickets, and 62,000 people visited our booth at the festivals. In 2018, we reconfirmed our partnership with the AB concert hall in Brussels, thereby reaching 300,000 visitors each year.

Sustainability We also renewed our partnerships with the Brussels cultural and classical music houses De Munt (opera) and Bozar (mix of classical and modern concerts), reaching about 500,000 visitors per year. Proximus is also partner of the Queen Elisabeth Music Chapel supporting young music talents from all over the world and the QE contest that each year welcomes many international artists. By sponsoring the Klara festival (VRT) and Musiq’3 Festival (RTBF), Proximus is actively supporting the accessibility of classical music to larger audiences. This music support includes big names but also smaller, more niche events and organizations that depend on the support of companies like us, and who are proponents of Belgian culture. This is something we wish to do more of in the future.

Sport Football In sports, we continue to sponsor three Pro league clubs: Brugge, Anderlecht and Charleroi (reaching about 1 million active foot fans). Proximus also confirmed title sponsorship of the First Division B football competition and added an eSports competition in 2018. We were also a proud sponsor of the Red Devils and actively supported the World Cup campaign by offering free data during the Red Devils’ games. By doing so, we reached more than 1 million fans. Finally, we reinforced our engagement to women’s football in Anderlecht and with the Red Flames.

2018 was an exceptional year for Belgian sports; think about our performance in football, gymnastics and hockey. Proximus is a historic sponsor of our national football team, the Proximus league as well as basketball and cycling events. Besides sports, we also sponsor local music festivals and cultural events.

We are the No. 3 advertiser in Belgium, we stimulate Belgian co-productions and share sports rights (football, cycling) with local media, thereby actively contributing to our local media industries, and looking with them at ways to safeguard the industry, through the development of new advertising models and innovation. 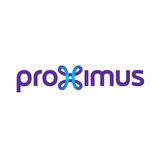