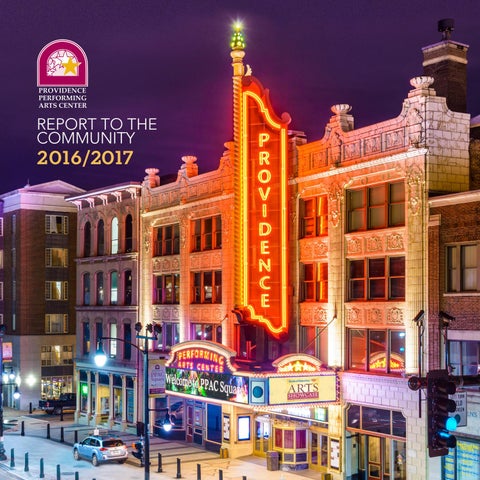 For use against a black or dark background

A MESSAGE FROM THE CHAIRMAN & PRESIDENT Dear Friends, For almost 90 years, PPAC has been a cultural and artistic gem for Providence and the State of Rhode Island. Today, it thrives by breathing life, vibrancy and economic gain into the region, honoring the cultural tapestry of the Ocean State and inspiring generations of people to learn, express and become. We are especially proud of the lasting impact PPAC has on the local arts community through our outreach initiatives and ongoing restoration projects. The Report to the Community is a means of staying connected by informing you of our initiatives, achievements and progress. We want to communicate to the public our mission – to serve, preserve and maintain – and, more importantly, celebrate PPAC’s strong commitment to our community. Recent highlights include: 

Achieving a year-over-year increase in the total number of Annual Fund donors and raising over $450,000 to fully support our Community Outreach Programs.

Maintaining a strong subscriber base and single ticket sales, welcoming nearly 400,000 people into the Theatre each year and producing more than $26 million in spending for the local community.

PPAC is ranked the #1 thing to do in Providence by Trip Advisor and earned their Certificate of Excellence.

PPAC launched the national tour of Beautiful – The Carole King Musical in September 2015 and Roundabout Theatre Company’s Cabaret in January 2016. PPAC will also launch the national tours of Rodgers & Hammerstein’s The King and I in November 2016 and Miss Saigon in Fall 2018.

PPAC is ranked 21st for ticket sales and attendance in POLLSTAR’S 2015 Top 200 Theatre Venues Worldwide and ranked 14th amongst theaters in the United States.

Thanks to a committed Board of Directors, effective staff, devoted volunteers, strong performance schedules and dedicated donors, PPAC continues to successfully uphold its mission to the community. We strongly encourage you to visit us online at ppacri.org, like us on Facebook (ProvPacRI) and follow us on Twitter and Instagram (@ProvPacRI). Sincerely,

PPAC is a non-profit organization with an ongoing commitment to give back to and demonstrate arts leadership in the community by:

Community Outreach Programs Every dollar donated to PPAC’s Annual Fund is used to support the Theatre’s Community Outreach Initiative. Each year, this Initiative brings theater to life for thousands of audience members and emerging artists by making available low or no-cost programming. 

From Books to Broadway

Wonders of the Wurlitzer

SEATS FOR SERVICE MEMBERS PPAC’s Seats for Service Members program gives members of the Rhode Island National Guard/USO New England and their families the opportunity to experience live theater first-hand by providing underwritten “preferred seating” to the Theatre’s Broadway performances throughout the year. PPAC created the Seats for Service Members program as a means to express the community’s gratitude and appreciation for our service members’ outstanding sacrifices and courageous efforts. This program is fully funded by generous donations from our community and would not be possible without the help of our sponsors.

WONDERS OF THE WURLITZER The Theatre’s one-of-a-kind 1927 Wurlitzer Theatre Pipe Organ is one of only three of its kind left in the country and PPAC’s organ remains the only fully functioning Wurlitzer in that group! To highlight this rare treasure, the Wurlitzer free concert series was presented for the first time in the spring of 1988. Since then, it has remained a regular part of the Theatre’s annual show schedule and has developed its own loyal following. Concerts are held on specific Wednesdays in the spring and fall. All performances are free and open to the public. People of all ages come to listen to the music performed by local organists who share their time and talent to keep a treasured tradition alive. Silent movies, sing-alongs, vocalists and other local performers add variety to the performances. Donations to the Annual Fund for Community Outreach provides ongoing upkeep and maintenance for the organ, a fee paid to each organist and complimentary coffee and soft drinks for patrons attending the performance. Each year, Wonders of the Wurlitzer brings musical memories and appreciation to our local patrons!

BANK OF AMERICA ARTS SHOWCASE Each year, the Bank of America Arts Showcase enables approximately 10,000 middle school students to attend PPAC during regular school hours to experience the joy and creativity of live theater. Performed on the PPAC stage by local professional performing arts groups, the Arts Showcase is designed to entertain, educate and inspire student audiences in new ways. Since the program’s inception in 1998, more than 180,000 Rhode Island middle school students have attended and enjoyed underwritten live performances at PPAC!

Over the years, the Theatre has hosted many special performances for middle school children. Here are some of the repeat favorites and recent new performers at the Arts Showcase: Atwater & Donnelly “Traditional American Folk Music & Dance” Carlos de Leon “Rhythms of Latin America” Everett Dance Company “The Marriage of Art & Science” Island Moving Company “Field Trip” interpretive dance Keith Michael Johnson “Bubbleology” Marvelous Marvin “How the Body Works” Mixed Magic Theatre “Shakespeare in the Spirit” Pendragon “Music in the Celtic Tradition” Rob the Drummer “Be the Best You Can Be”

CAMP BROADWAY® The authentic world of Broadway comes to Providence through this one-of-a-kind program, lead by a nine-member staff of New York theater professionals. Each year at Camp Broadway, 100 children ages 10-17 experience the magic of presenting a show in a professional, interactive environment. Held each August, the fun, intensive day camp is designed to teach the fundamentals of a Broadway production through classes and workshops in singing, dancing and theater arts, lunch with professional artists, Camp Broadway t-shirts and a Family Finale performance – all in only five days!

Since 1996, PPAC’s ARTS Scholarships programs have provided financial assistance to qualified, talented Rhode Island students who wish to attend local, summer arts education programs that further develop their abilities in a chosen area of study. Scholarships help cover tuition and supplies and provide the rare opportunity for students to enhance their artistic abilities outside the traditional classroom leading to exploration, growth and confidence.

Each year, 30 scholarships are awarded to Rhode Island students aged 11 – 14. Since the program’s inception, PPAC has granted $260,000 in scholarships to over 550 middle school students, affording each recipient a summer vacation filled with artistic exploration, challenge and achievement.

FROM BOOKS TO BROADWAY Generously supported in part by The Robert F. Stoico / FIRSTFED Charitable Foundation

From Books to Broadway exposes middle and high school students to the Theatre by providing underwritten tickets to Broadway shows combined with a cast member “meet and greet.” The program brings Broadway show information into the schools in a way that emphasizes the show’s educational aspects as well as information about production values, costumes and other theater topics. Visiting cast members discuss their education, experience and how they entered touring theatricals; in some cases, the cast members may even demonstrate some of their skills. This program has given hundreds of students the rare opportunity to attend a live Broadway

performance along with the personal connection of meeting cast members and gaining insight into their theatrical careers.

(mentors) and “littles” (children). For many children in the BBBSOS program, this may be the very first time they get to experience live theater or their first visit to PPAC.

ANNUAL GALA & RESTORATION Each season, PPAC’s Annual Gala brings together over 600 supporters from within our community for an elegant evening of entertainment and spectacular food prepared by some of Rhode Island’s top restaurants and catering companies. Contributions to the Annual Gala benefit the Theatre’s Restoration Fund, which is set aside for building repairs and upgrades. Most recently, PPAC completed the energy efficient window replacement in the Loew’s office building, upgraded the HVAC system to provide better cooling in the Theatre balcony, completely renovated the backstage dressing rooms and replaced the carpet throughout the entire Theatre.  Upcoming projects include new HVAC for the stage and replacement of the fabric wall covering in the Theatre.

CELEBRATE! For almost 90 years, this magnificent Theatre building has been a Rhode Island gem and cultural icon for the Ocean State. Help it sparkle and shine for years to come by attending Rhode Island’s most anticipated Annual Gala.  PPAC Gala patrons enjoy prime seating for the show, complimentary parking and an exclusive post show reception!

The Phantom of The Opera

DISTINGUISHED FRIENDS Every several years, PPAC recognizes donors for their long standing, generous support of the Theatre. In recognition of their continuous contribution over the past ten years to PPAC’s Annual Fund, PPAC honored these donors as our “Distinguished Friends.”

COMMUNITY PARTNERSHIPS Learn It to Earn It is a partnership between PPAC and Rhode Island Monthly. The intent of the program is to bring the excitement of live theater to students who may not have the opportunity to experience it otherwise. Up to 100 students from Central Falls High School attended a matinee performance of The Sound of Music with tickets underwritten by proceeds from the 2015 Best of Rhode Island Party.

Macy’s Family Night is a partnership between PPAC and Macy’s Providence Place. Through this partnership, hundreds of Rhode Island children have been able to attend a designated Broadway performance that they may not otherwise be able to see.

The Sound of Music cast at Learn It to Earn It

VOLUNTEER USHER PROGRAM The PPAC volunteer usher staff is among the most dedicated group of people you’ll ever come in contact with…and if you’ve attended a performance at PPAC, you have been in contact with at least one of the 300 members of that group! Seating, directing and assisting upward of 3,100 patrons so they can comfortably and safely enjoy the performance is no easy task. They dedicate thousands of hours each season to ensure things run smoothly at every performance. Ushers are students, members of the community and local business people.

Many are senior citizens who have been performing this civic act continuously for more than 15 years. In their service to the Theatre, they have become a family and have forged relationships that last a lifetime.

PPAC BOARD OF DIRECTORS

Assistant to the Director of Finance & Programming

Administrative Assistant to the General Manager 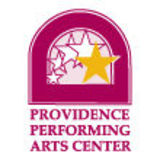