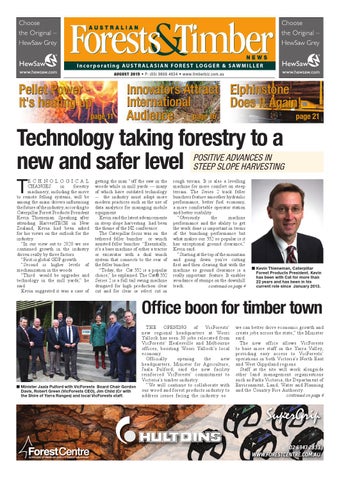 Technology taking forestry to a new and safer level

E C H NOL O GICA L CHANGES in forestry machinery, including the move to remote felling systems, will be among the main drivers influencing the future of the industry, according to Caterpillar Forest Products President Kevin Thieneman. Speaking after attending HarvestTECH in New Zealand, Kevin had been asked for his views on the outlook for the industry. “In our view out to 2020 we see continued growth in the industry driven really by three factors. “First is global GDP growth. “Second is higher levels of mechanization in the woods “Third would be upgrades and technology in the mill yards,” he said. Kevin suggested it was a case of

getting the man “off the saw in the woods while in mill yards --- many of which have outdated technology -- the industry must adopt more modern practices such as the use of data analytics for managing mobile equipment Kevin said the latest advancements in steep slope harvesting had been the theme of the NZ conference. The Caterpillar focus was on the tethered feller buncher or winch assisted feller buncher. “Essentially, it’s a base machine of either a tractor or excavator with a dual winch system that connects to the rear of the feller buncher. “Today, the Cat 552 is a popular choice,” he explained. The Cat® 552 Series 2 is a full tail swing machine designed for high production clear cut and for clear or select cut in

rough terrain. It is also a levelling machine for more comfort on steep terrain. The Series 2 track feller bunchers feature smoother hydraulic performance, better fuel economy, a more comfortable operator station and better visibility. “Obviously the machine performance and the ability to get the work done is important in terms of the bunching performance but what makes our 552 so popular is it has exceptional ground clearance,” Kevin said. “Starting at the top of the mountain and going down you’re cutting first and then clearing that with the machine so ground clearance is a really important feature. It enables avoidance of stumps on the downhill track. continued on page 4

¢ Kevin Thieneman, Caterpillar Forest Products President. Kevin has been with Cat for more than 22 years and has been in his current role since January 2013.

we can better drive economic growth and create jobs across the state,” the Minister said. The new office allows VicForests to base more staff in the Yarra Valley, providing easy access to VicForests’ operations in both Victoria’s North East and West Gippsland regions. Staff at the site will work alongside other land management organisations such as Parks Victoria, the Department of Environment, Land, Water and Planning and the Country Fire Authority.

Australian Forests & Timber News covers the timber industry from getting trees into the ground to the finished product going into construction and manufacturing. All the latest news, equipment, personnel movements and events. We have regular sections on subjects such as plantations and biofuels, the industry’s strongest classified pages and special features on everything from kiln drying to training and chipping to computing.