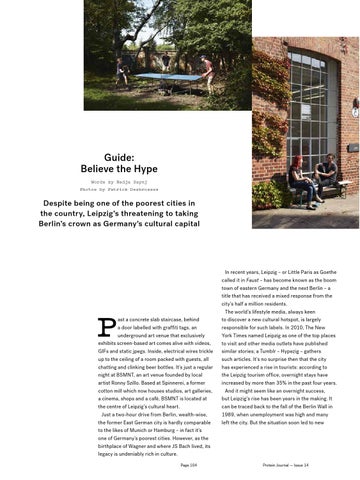 Despite being one of the poorest cities in the country, Leipzig’s threatening to taking Berlin’s crown as Germany’s cultural capital

In recent years, Leipzig – or Little Paris as Goethe called it in Faust – has become known as the boom town of eastern Germany and the next Berlin – a title that has received a mixed response from the

to discover a new cultural hotspot, is largely

a door labelled with graffiti tags, an

responsible for such labels. In 2010, The New

York Times named Leipzig as one of the top places

to visit and other media outlets have published

up to the ceiling of a room packed with guests, all

such articles. It’s no surprise then that the city

has experienced a rise in tourists: according to

night at BSMNT, an art venue founded by local

artist Ronny Szillo. Based at Spinnerei, a former

increased by more than 35% in the past four years.

a cinema, shops and a café, BSMNT is located at

but Leipzig’s rise has been years in the making. It

the centre of Leipzig’s cultural heart.

1989, when unemployment was high and many left the city. But the situation soon led to new

to the likes of Munich or Hamburg – in fact it’s one of Germany’s poorest cities. However, as the birthplace of Wagner and where JS Bach lived, its legacy is undeniably rich in culture. Page 104

In our exclusive Travel Report we explore the recent developments, be they technological, cultural or economical, that have drastically altered how the millennial generation gets away from it all. Features include an examination into the new tribes of travellers that are emerging, as well as an article on how hotels are shifting their focus from merely being accommodation for travellers, to becoming their cultural guides. As well as this we have the usual dose of exciting, disruptive ideas from all across the creative industry. We speak to Telfar Clemens, the New York designer who’s not afraid to have a little fun with the fashion industry, as well as Studio Études, the Parisian polymath creative agency with a wildly diverse skill set. We also travel to Leipzig, the city widely heralded as the challenger to Berlin’s crown as the country’s cultural capital, to see what all the fuss is about. 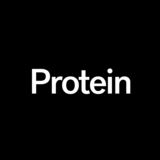