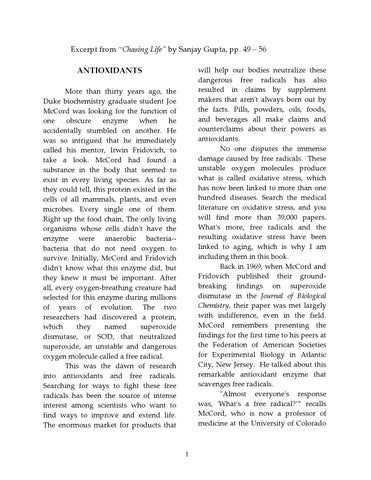 Excerpt from “Chasing Life” by Sanjay Gupta, pp. 49 – 56 will help our bodies neutralize these ANTIOXIDANTS dangerous free radicals has also resulted in claims by supplement makers that arenʹt always born out by the facts. Pills, powders, oils, foods, and beverages all make claims and counterclaims about their powers as antioxidants. No one disputes the immense damage caused by free radicals. These unstable oxygen molecules produce what is called oxidative stress, which has now been linked to more than one hundred diseases. Search the medical literature on oxidative stress, and you will find more than 39,000 papers. Whatʹs more, free radicals and the resulting oxidative stress have been linked to aging, which is why I am including them in this book. Back in 1969, when McCord and Fridovich published their ground‐ breaking findings on superoxide dismutase in the Journal of Biological Chemistry, their paper was met largely with indifference, even in the field. McCord remembers presenting the findings for the first time to his peers at the Federation of American Societies for Experimental Biology in Atlantic City, New Jersey. He talked about this remarkable antioxidant enzyme that scavenges free radicals. ʺAlmost everyoneʹs response was, ʹWhatʹs a free radical?’” recalls McCord, who is now a professor of medicine at the University of Colorado

More than thirty years ago, the Duke biochemistry graduate student Joe McCord was looking for the function of one obscure enzyme when he accidentally stumbled on another. He was so intrigued that he immediately called his mentor, Irwin Fridovich, to take a look. McCord had found a substance in the body that seemed to exist in every living species. As far as they could tell, this protein existed in the cells of all mammals, plants, and even microbes. Every single one of them. Right up the food chain, The only living organisms whose cells didnʹt have the enzyme were anaerobic bacteria‐‐ bacteria that do not need oxygen to survive. Initially, McCord and Fridovich didnʹt know what this enzyme did, but they knew it must be important. After all, every oxygen‐breathing creature had selected for this enzyme during millions of years of evolution. The two researchers had discovered a protein, which they named superoxide dismutase, or SOD, that neutralized superoxide, an unstable and dangerous oxygen molecule called a free radical. This was the dawn of research into antioxidants and free radicals. Searching for ways to fight these free radicals has been the source of intense interest among scientists who want to find ways to improve and extend life. The enormous market for products that

Health Sciences Center and works for a supplement maker. There are different markers of oxidative stress in the body that increase more or less in a straight line as we age. Your level at forty is greater than your level at thirty. Your level at fifty is greater than your level at forty, and so on. Oxidative stress is like the wear and tear on a car, McCord says. In fact, one way to view aging is the slow oxidation of your body. This raises a question: What, if anything, can we do to stop free radicals in our bodies from oxidizing—or aging—us in order to extend our lives and improve our health? Before I look at that question, letʹs consider what we mean when we talk about antioxidants.

carʹs engine. In a car, the result is the production of carbon monoxide. Unlike a car, we have built‐in ways to repair minor damage and neutralize free radicals: antioxidants. They are able to scavenge most of these free radicals. However, they do not get all of them, and as we age, the remaining free radicals cause damage. Our own ʺengineʺ becomes less efficient. The ʺtailpipe emissionsʺ get dirtier, These dirty emissions, the free radicals, eventually cause too much damage to be repaired by the bodyʹs own mechanisms. As a result, our bodies start breaking down. Ground zero for oxidative damage is the mitochondria, the cellsʹ power plants. Mitochondria are microscopic, sausageshaped structures inside the cells. Hundreds of mitochondria exist in every cell. The mitochondria convert sugars and oxygen into adenosine triphosphate (ATP), an energy‐releasing molecule that powers most of what goes on in the cell. Like most power plants, the process is not perfectly efficient. There is some ʺpollution.ʺ In the case of the mitochondria, the potentially harmful by‐products are the free radicals. The free‐radical oxygen molecules are highly reactive because they are missing one electron, and electrons are most stable when theyʹre paired. To become more stable, free radicals steal electrons from other molecules. These molecules, in turn, become unstable and steal molecules from still other

FIGHTING FREE RADICALS Many of the systems in our body exist simply to take in oxygen and get it to our cells. We breathe oxygen into our lungs, transfer it to our red blood cells, and then our heart pumps it around our bodies, where cells use it to burn sugars to create energy. Unfortunately, there is a downside to this process. A byproduct of this energy production is an unstable form of the oxygen molecule, This is a free radical, and it can wreak havoc at the cellular level, damaging cells. That means oxygen, the same basic element that sustains us, may sow the seeds of cellular aging. Extending the car analogy, McCord likens these free radicals to incomplete combustion in a

molecules. The chain reaction results in cellular damage, including damage to DNA and the mitochondria themselves. Damage to the DNA can cause tumors and cancer. Damage to the mitochondria causes them to become less efficient and, over time, generate less energy‐ producing ATP and more free radicals. Eventually, enough oxidative damage occurs to trigger the cell to self‐destruct. As oxidative damage accumulates, it can damage connective and nerve tissues and blood vessels. Energy production in our cells is not the only reason free radicals form in our bodies. Smoking, exposure to the sun, and other environmental factors also produce free radicals that can cause premature cellular aging. It stands to reason that anything we can do to eliminate free radicals would greatly benefit us in our quest to live longer, healthier lives. So it shouldnʹt come as a surprise that our bodies have developed ways to fight rampaging free radicals. Vitamins A, C, and E, SOD, and two other enzymes you probably havenʹt heard of —catalase and glutathione peroxidase—prevent most but not all of the oxidative damage in cells. As I mentioned earlier, oxidative damage still takes place. Stopping that process could be one of the biggest keys to chasing life. How can we better arm our bodiesʹ own defenses to fight more successfully against these free radicals? For years, researchers thought the solution might lie in antioxidant vitamins. Supplementing our diets with these vitamins, scientists reasoned, might

reduce the number of free radicals and help prevent age‐related diseases, such as cancer and heart disease. The government and others underwrote large‐scale, long‐term studies to see whether increased doses of vitamin E, vitamin A, and vitamin C would offer extra disease‐fighting protection. The experiments did not produce the hoped‐for results. ʺI think we unfortunately went down the garden path,ʺ McCord says. ʺWe had the idea that more would be better, and there was very little evidence of that.ʺ The American Heart Association released a science advisory in 2004 that said research on vitamin C, vitamin E, and beta‐carotene (a form of vitamin A) supplements failed to justify their use to prevent or treat cardiovascular disease. The American Cancer Society also does not advocate taking these vitamins as supplements, because the results of studies testing their results against cancer have been disappointing. In fact, in cancer patients, taking vitamin E might hurt the bodyʹs natural ability to fight tumor cells by actually helping keep tumor cells alive. Jeffrey Blumberg, director of the Antioxidants Research Laboratory at the USDA Human Nutrition Research Center on Aging, at Tufts University, was not surprised by the studiesʹ disappointing results and is critical of studies that look for a nutrient, such as vitamin E, to prevent cancer or heart disease. The antioxidant defense 3

network is complicated, he says, involving both what we eat and what our cells produce. ʺItʹs not a one nutrient, one disease sort of thing. Itʹs complex.ʺ Studies of the disease‐fighting power of different vitamins tend to be overly simplistic, he says, trying to cure one disease with one supplement at one dose. Antioxidants work in concert, he says, as part of a dynamic system in the body. Like the American Heart Association and American Cancer Society, Blumberg advocates a balanced diet rich in whole grains and a variety of fruits and vegetables. As weʹve seen, eating fruits and vegetables, which are loaded with antioxidants, has been linked to a lower risk for many chronic and potentially life‐shortening diseases. ʺI do feel there is an enormous power to nutrition,ʺ Blumberg says, adding that we need to eat in moderation and eat a wide array of fruits and vegetables to maximize the power of good nutrition. ʺYou need that diversity, that variety of plant foods to provide the full complement of antioxidant nutrients.ʺ McCord, now in the Division of Pulmonary Sciences and Critical Care Medicine at the University of Colorado Health Sciences Center, is not ready to give up on using supplements as antioxidants just yet. The biochemist thinks the disappointments from vitamin studies do not show that antioxidant supplements do not work, just that the research has been misdirected.

ʺAntioxidant therapy is by no means a dead topic; we have simply been looking at the wrong ones,ʺ McCord says. The focus, he says, should be on how we can supplement our diets to increase the levels of the two enzymes that do the heavy lifting when it comes to neutralizing free radicals: superoxide dismutase (SOD), the enzyme he codiscovered almost four decades ago, and catalase. These two enzymes, he says, are responsible for scavenging 99 percent of the free radicals in the body. If we can get the body to produce more of these enzymes, he reasons, then it would do a better job at fighting free radicals. Donʹt bother popping pills containing SOD. This is useless, because it is digested and churned up by the stomach like any other protein. McCord says there are about forty plants, most of them used in traditional medicine in India and China, that have been shown to induce the body to produce more SOD and catalase. McCord recently coauthored an article in the journal Free Radical Biology and Medicine that showed how a supplement containing five such plant extracts not only increased the bodyʹs production of SOD and catalase but decreased the markers for oxidative stress associated with aging. Whether this translates into longer life remains to be seen. The supplement contained extracts of the following: 1. green tea 2. turmeric 4

3. milk thistle 4. ashwaganda and, 5. bacopa. Ashwaganda (also spelled ashwagandha) is a plant also known as winter cherry. Bacopa is an herb. This was a very small study, with only twentyaine participants, but statistically very strong. Still a lot more research needs to be done. ʺIt may not be the final answer, but it may open a doorway that has a lot of answers behind it,ʺ says McCord. He enjoys thinking that the enzyme he discovered almost forty years ago may be at the heart of antioxidant research in the years to come.