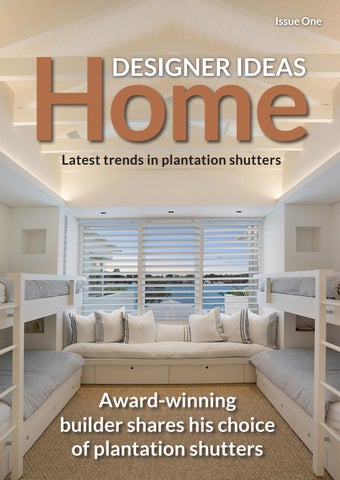 e speak with Daniel Syddall to find out why, in the first stage of building this Wagstaffe project, he changed suppliers opting for OpenShutters to complete their final order of plantation shutters. This story offers many lessons to people purchasing plantation shutters. Daniel shares with us the difference it can make to the overall look of your home when you choose a bespoke set of plantation shutters instead of installing off-theshelf shutters available in

retail outlets. Why was the choice of plantation shutters crucial in building this Wagstaffe property? Described as a &quot;Waterside Haven&quot; by Hunter Home magazine, the building of this seven-bedroom, five-bathroom house, overlooking a stunning Central Coast waterway, demanded the highest standards possible. Having dreamed of a property that would offer them a sophisticated yet rustic style beach house, the owners of this designer home

were disappointed with the plantation shutters that were initially installed. &quot;You have to be very careful choosing plantation shutters. In a showroom, it is hard to tell the difference between a cheaper brand and a better quality product,&quot; said Daniel Syddall. &quot;It was only when the first order of plantation shutters arrived, that the owners realised that their choice based on a cheaper quote proved to be not right for their property.&quot; So with the full support of his client and architect, Daniel was

OpenShutters powder-coated each window shutter matching the colour scheme we had chosen. able to reach out and use the one supplier he always recommends for plantation shutters, Central Coast-based OpenShutters. Given you were halfway into the project when this issue occurred and time was running out, how did OpenShutters help get you back on track? &quot;I have successfully worked with OpenShutters&#39; owner Gail Cottrill, on many projects like this before,&quot; said Daniel. &quot;I knew Gail and her team produce the best, and that&#39;s who we had recommended originally. &quot;The building of this Wagstaffe home was no ordinary project. The shutters had to fit into pockets and tight spaces. &quot;For these plantation shutters to work properly, they had to operate on pivots, whereas most companies place them on hinges.

&quot;Basically the shutters in this home had to be fit for purpose. We were working with oversized width shutters, normally not available in most retail outlets. &quot;Even if we were to source a Chinese imported version, they wouldn&#39;t have fit the large windows and openings in this property. &quot;Whereas OpenShutters were able to provide us with better quality metals and blades that fitted perfectly. What is the difference between an off-the-shelf plantation shutter and what OpenShutters supplied you for this project? &quot;Flexibility, I suppose. The plantation shutters used on this project had to be sized down to the millimetre,&quot; explains Daniel. &quot;If you buy shutters at a retail outlet, they&#39;ve got one size, and it&#39;s supposed to fit all.

&quot;In a situation where you&#39;re building designer homes, one size doesn&#39;t fit all. &quot;You must remember that plantation shutters are the finishing touch. In this home, the views are spectacular. If ill-fitting plantation shutters visually hinder those views, the look you are trying to create is destroyed. &quot;Take for example the colour scheme we used. Unlike a retail supplier, OpenShutters were able to powder coat each shutter to match the colour scheme we had chosen. &quot;Yes, OpenShutters offers a completely bespoke service, whether it be the choice of mechanisms used to operate the shutters, or the ability to change the colour of each shutter. &quot;Without Gail&#39;s hardwork and the OpenShutters team&#39;s help, this home would not look as good as it does today!&quot;

aniel Syddall has been described by Hunter Home Magazine as &quot;a builder with a passion for perfection.&quot; A comment proved by his record of building Award-Winning designer homes. We asked Daniel to describe what he looks for when he chooses a supplier. &quot;As we specialise in building the best money can buy, our clients want every detail to be perfect,&quot; said Daniel. &quot;You can&#39;t deliver this standard unless you have suppliers providing you with fittings that not only look good but work perfectly in the environment. &quot;Some would say that this involves extra expense. I beg to differ. &quot;On a recent project a client chose to install some cheaper shutters, but were very disappointed with the result.

&quot;So mid-project we had to change them to plantation shutters provided by our normal high quality supplier â&amp;#x20AC;&amp;#x201C; OpenShutters. &quot;Because of the quality standards they operate under, you&#39;ll most likely get about four to five years extra life from their plantation shutters. What makes OpenShutters&#39; product far superior to your average imported shutter? &quot;They&#39;re Australian made. Their factory is located close by, offering excellent local service,&quot; explains Daniel. &quot;It&#39;s what you don&#39;t see inside the shutters that make the difference. It&#39;s their finely tuned mechanisms working with inside the shutter that give you that extra-long life. &quot;People don&#39;t understand that inside a shutter multiple components are working

together. OpenShutters use stainless steel for most of their fittings, whereas cheaper brands use plastic. &quot;The cheaper components, the shorter the life span you can expect from your window shutters.&quot; &quot;Plus, OpenShutters use inhouse installers, whereas most retailers use sub-contractors. &quot;It makes a huge difference to quality control, as you&#39;re getting everything from the front to the back end from the one supplier. &quot;You are engaging a company that in-house designs, fabricates and install shutters full-time. &quot;They don&#39;t produce anything but plantation shutters, which is why OpenShutters is always my first recommendation.&quot; To find out how Gail and the team at OpenShutters can help you, phone 02 4389 8966.

Disclaimer Notice: Neither OpenShutters, nor Persuasive Marketing Pty Ltd, nor the publishers and editors of articles in this issue, accept any form of liability, be it contractual, tortious or otherwise, for the contents of this newsletter or for any consequences arising from its use or any reliance placed upon it. All the information contained in this publication has been provided to us by various parties. We do not accept any responsibility to any person for its accuracy and do no more than pass it on. All interested parties should make and rely upon their own enquires in order to determine whether or not this information is in fact accurate. ÂŠPersuasive Marketing Pty Ltd 2012 Ph: +61 2 4954 2100 www.persuasivemarketing.com.au