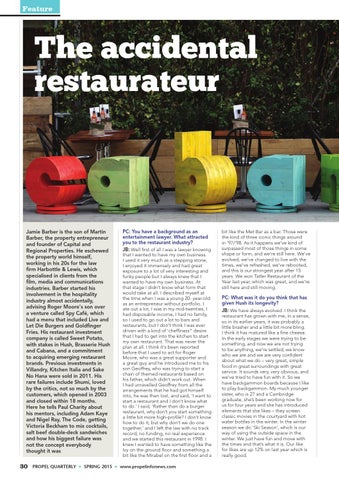 Jamie Barber is the son of Martin Barber, the property entrepreneur and founder of Capital and Regional Properties. He eschewed the property world himself, working in his 20s for the law firm Harbottle & Lewis, which specialised in clients from the film, media and communications industries. Barber started his involvement in the hospitality industry almost accidentally, advising Roger Moore's son over a venture called Spy Café, which had a menu that included Live and Let Die Burgers and Goldfinger Fries. His restaurant investment company is called Sweet Potato, with stakes in Hush, Brasserie Hush and Cabana, and a commitment to acquiring emerging restaurant brands. Previous investments in Villandry, Kitchen Italia and Sake No Hana were sold in 2011. His rare failures include Shumi, loved by the critics, not so much by the customers, which opened in 2003 and closed within 18 months. Here he tells Paul Charity about his mentors, including Adam Kaye and Nigel Ray, The Code, getting Victoria Beckham to mix cocktails, salt beef double-deck sandwiches and how his biggest failure was not the concept everybody thought it was

PC: You have a background as an entertainment lawyer. What attracted you to the restaurant industry? JB: Well first of all I was a lawyer knowing that I wanted to have my own business. I used it very much as a stepping stone, I enjoyed it immensely and had great exposure to a lot of very interesting and funky people but I always knew that I wanted to have my own business. At that stage I didn’t know what form that would take at all. I described myself at the time when I was a young 20- year-old as an entrepreneur without portfolio. I ate out a lot, I was in my mid-twenties, I had disposable income, I had no family, so I used to go out a lot to bars and restaurants, but I don’t think I was ever driven with a kind of 'cheffiness” desire that I had to get into the kitchen to start my own restaurant. That was never the plan at all. I think it's been reported before that I used to act for Roger Moore, who was a great supporter and a great guy and he introduced me to his son Geoffrey, who was trying to start a chain of themed restaurants based on his father, which didn’t work out. When I had unravelled Geoffrey from all the arrangements that he had got himself into, he was then lost, and said, 'I want to start a restaurant and I don’t know what to do.' I said, 'Rather than do a burger restaurant, why don’t you start something a little bit more high-profile? I don’t know how to do it, but why don’t we do one together,' and I left the law with no track record, no funding, no real experience and we started this restaurant in 1998. I knew I wanted to have something like the Ivy on the ground floor and something a bit like the Mirabel on the first floor and a

bit like the Met Bar as a bar. Those were the kind of three iconic things around in ’97/’98. As it happens we’ve kind of surpassed most of those things in some shape or form, and we’re still here. We’ve evolved, we’ve changed to live with the times, we’ve refreshed, we’ve rebooted, and this is our strongest year after 15 years. We won Tatler Restaurant of the Year last year, which was great, and we’re still here and still moving. PC: What was it do you think that has given Hush its longevity? JB: We have always evolved. I think the restaurant has grown with me, in a sense, so in its earlier years, it was probably a little brasher and a little bit more bling. I think it has matured like a fine cheese. In the early stages we were trying to be something, and now we are not trying to be anything, we’re settled, we know who we are and we are very confident about what we do – very great, simple food in great surroundings with great service. It sounds very, very obvious, and we’ve tried to have fun with it. So we have backgammon boards because I like to play backgammon. My much younger sister, who is 27 and a Cambridge graduate, she’s been working now for us for four years and she has introduced elements that she likes – they screen classic movies in the courtyard with hot water bottles in the winter. In the winter season we do 'Ski Season', which is our way of using the outside space in the winter. We just have fun and move with the times and that’s what it is. Our like for likes are up 12% on last year which is really good.