PRØOF Magazine: For the Record 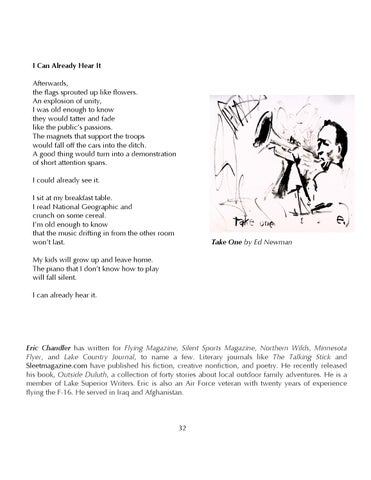 I Can Already Hear It Afterwards, the flags sprouted up like flowers. An explosion of unity, I was old enough to know they would tatter and fade like the public’s passions. The magnets that support the troops would fall off the cars into the ditch. A good thing would turn into a demonstration of short attention spans. I could already see it. I sit at my breakfast table. I read National Geographic and crunch on some cereal. I’m old enough to know that the music drifting in from the other room won’t last.

Take One by Ed Newman

My kids will grow up and leave home. The piano that I don’t know how to play will fall silent. I can already hear it.

Eric Chandler has written for Flying Magazine, Silent Sports Magazine, Northern Wilds, Minnesota Flyer, and Lake Country Journal, to name a few. Literary journals like The Talking Stick and Sleetmagazine.com have published his fiction, creative nonfiction, and poetry. He recently released his book, Outside Duluth, a collection of forty stories about local outdoor family adventures. He is a member of Lake Superior Writers. Eric is also an Air Force veteran with twenty years of experience flying the F-16. He served in Iraq and Afghanistan.

PRØOF Magazine: For the Record