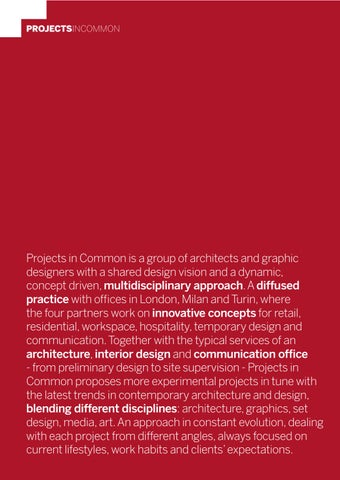 Projects in Common is a group of architects and graphic designers with a shared design vision and a dynamic, concept driven, multidisciplinary approach. A diffused practice with offices in London, Milan and Turin, where the four partners work on innovative concepts for retail, residential, workspace, hospitality, temporary design and communication. Together with the typical services of an architecture, interior design and communication office - from preliminary design to site supervision - Projects in Common proposes more experimental projects in tune with the latest trends in contemporary architecture and design, blending different disciplines: architecture, graphics, set design, media, art. An approach in constant evolution, dealing with each project from different angles, always focused on current lifestyles, work habits and clientsâ&#x20AC;&#x2122; expectations.

GUENDALINA DI LORENZO architect From 1997 to 2000 she worked in London where, with Andrew Martin and Harper Mackay Architects she designed hotels and restaurant interiors, offices and fashion showrooms. Hilton Hotels, Channel 4 Tv and Vivienne Westwood are Among her clients. In 2000 she joined Ettore Sottsass in Milan designing and supervising home, leisure, office and retail interiors in Italy and abroad. In 2003 she established her own practice in Milan. She experienced theatre set design in Rome and worked as an architectural consultant for magazines like Abitare and Panorama. From 2007 to 2014 she was a regular lecturer for the Interior Design Master Course at Domus Academy and Scuola Politecnica di Design in Milan and lectured in Hong Kong and Istanbul. She is now visiting professor at IED, Istituto Europeo di Design in Turin. In 2014 she completed the new shop concept for La Feltrinelli Franchising, she’s currently working on two residential projects in central Milan and she has just completed two refurbishments in London. From 2014 she is partner and co-founder of the architecture firm Projects in Common with offices in London, Milan and Turin.

FABRIZIO LEPORE architect After short work experiences with Santiago Calatrava in Paris and Emilio Ambasz in New York, he co-founded his own architecture practice C+ farinaro lepore architetti associati in Milan, Italy. Among C+ works there are many high-profile fashion stores, interior design of showrooms, projects of luxury residences, residential complexes and private homes, as well as competition projects for office buildings and public institutions’ headquarters. He had been teaching for many years as a Project Leader in the Master courses at Domus Academy in Milan and lectured in Moscow, Seoul e Teheran. He was a Visiting Scholar in Urban Design at Columbia University, New York, and has a Master in Design Studies from Harvard University. He lives and works in London and from 2014 he is partner and co-founder of Projects in Common.

ANTONELLA PROVASI graphic designer She studied with Ornella Noorda and Giorgio Fioravanti. From 1993 to 1995 she worked at Edizioni L’Archivolto, a Milanese publisher specialized in architecture and design. From 1995 to 2001 she was junior art director at Sottsass Associati, undertaking corporate image projects for publishers and for important companies, including signage and communication for Malpensa International airport in Milan. In 2001 she joined Christoph Radl, creative director of some the most important fashion and design brands in Italy, and she was in charge of major projects: among them Mila Schön, Nannini, Magis and Arketipo. She is currently art director of the communication design project for Ceramica Bardelli, Appiani and for the Istituto Svizzero di Roma. From 2014 she is partner and co-founder of Projects in Common.

BENEDETTA SEVERI architect After a Bachelor Degree in Architecture at Politecnico di Torino (Italy), in 2005 she joins Anna Giorgi and Partners architecture firm in Milan (Ita) accomplishing various activities from urban planning to private and residential architecture, interiors restoration and industrial design. Among the most important projects, the construction of the five stars Relais Mont Blanc in Courmayeur (Ita). In 2007 she starts an independent activity for Private Committee, still ongoing, focusing on interior design. In 2012 she joins CLS Architetti, an international firm based in Milan (Ita) which focuses on architecture of new buildings, shops and showrooms worldwide. Among the main projects accomplished, there is a 1000sqm Paul & Shark Flagship Store in Milan as well as private apartments for high net worth individuals in fashion and finance. From 2014 she is partner and co-founder of Projects in Common.