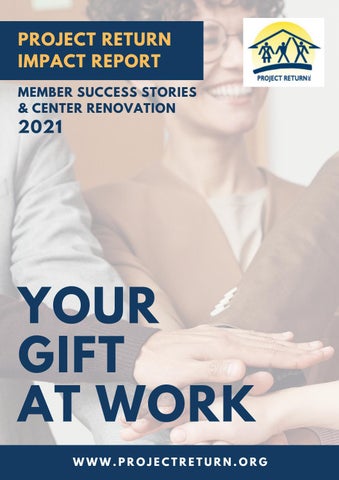 YOUR GIFT AT WORK WWW.PROJECTRETURN.ORG

John is one of the original members of Project Return, who has been coming for over 30 years since the Center was first opened. He met his wife of over 32 years, Christy, at Project Return and it’s where he’s continued to come to find solace in the wake of her passing in June 2020. John is an award-winning and exhibiting artist, often painting two to three pieces before the day will even be over! It’s at the Center where he can get out of the daily monotony of life, and find a wider range of enthusiasm for the arts through the classes at Project Return. His dedication to his continued growth and learning as an artist is truly inspiring. “My art is an attempt to make sense of strange experiences I’ve had throughout my life, by using color to express inner realities rather than to describe the world. I am inspired by scenes of ordinary life because it was often denied to me by my mental illness. Seemingly mundane scenes seem at times to glow with a supernatural intensity, and I hope to have captured that even in my paintings.”

Cogee has been coming to Project Return for many years, and has astonished everyone with her ability to crochet scarves, hats and t-shirts while also being visually impaired. She began knitting but found that crocheting was a bit easier for her to manage and has been working hard to perfect it for the last 10 years! She has been a guest speaker at the Great American Teach-In every year since 2002, and remains a huge source of inspiration for Project Return members. Cogee is an example to the ones who can often feel discouraged because of their disabilities, and gives them reason to see that they are more capable than they may give themselves credit for. Cogee loves to come and socialize with other members, especially those who also knit and crochet. It’s at the center where she has the ability to play bingo to win prizes, and enjoy listening to romance stories and audiobooks. She loves when stories are read aloud in Reading and Rap, because it gives her a reason to escape some of the repetitiveness of everyday to experience “another world.”

Sandro has been dancing and drawing since a young age, but coming to Project Return over five years ago has given him a chance to work on those interests even more. It can be hard to find others with similar hobbies, and it’s at the Center he has been able to make friends to dance and exercise with. He had received a lot of encouragement from past teachers and members to take up art again, and has continuously been working his way from sketches on paper to now large scale paintings on canvas! He pulls his inspiration from graffiti and hip-hop culture, and uses that to create his own unique style. He describes making art as an “explosion of ideas,” and seeing the other artists at the Center has pushed him to work harder, and work collaboratively with other creatives. Focusing on his progress and having a positive future is critical to Sandro, and he’s grateful that Project Return has been a place to channel that.

RECENT UPDATES & RENOVATIONS AT THE CENTER

THE CENTER GETS A FACELIFT

Project Return’s Educational Drop In Center closed its doors temporarily on March 16th as part of COVID-19 orders, but the time spent closed was used for the betterment of the Center and our members. A small group of staff members safely worked to clear out and purge the building in preparation for a major facelift. The exterior and interior walls were freshly painted, and brand new floors were installed. A professional art gallery hanging system was added to better display the member’s artwork, and give the pieces the ability to be a focal point of the Center. To continue to ensure the safety of the members and staff, Plexiglas was placed along the kitchen entryways and desk areas, along with all new 6 foot long tables to promote social distancing.

A NEW CHAPTER IN OUR HISTORY

Members were unaware of the renovations that were happening during the closure, so when our doors opened back up on June 8th, 2020, they were in amazement about the improvements. It has given them a new sense of confidence in their care and safety at Project Return during a time with an incredible amount of uncertainty. The brightening up of the Center – a place many of the members call home – has in a lot of ways also brightened their lives during a time of darkness. They are grateful and excited to keep growing with us in this new chapter of Project Return’s history. We are excited to share a few Project Return Member success stories and updates with our community and generous donors. Support from you all...

We are excited to share a few Project Return Member success stories and updates with our community and generous donors. Support from you all...