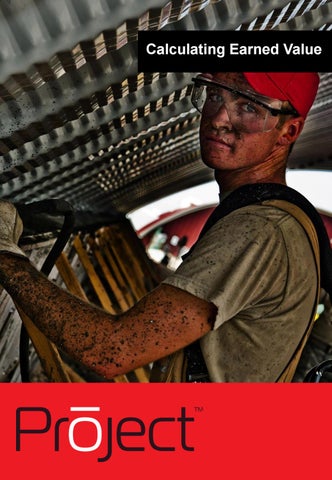 What is Earned Value As more public sector contracts are requiring suppliers to monitor not just the costs and schedules, but also value add, through Earned Value Management; this best practice methodology is being adopted not only by major construction and infrastructure organisations, but also by professional services organisations involved with complex client projects. Earned Value is not a new idea, it has been in use since the industrial revolution. It came to prominence first in the US when the government introduced earned value management as a requirement for their contracts, and has been replicated within the UK as Government Departments are keen to establish the value add of their major

contracts. In addition the Project Management Institute has adopted it as a proven project management methodology to help keep projects on schedule and within budget. The National Audit Office’s definition of earned value management is “a technique for measuring project performance and progress, based at its simplest on quantified measures of work planned (planned value) and work completed (earned value)”.

Of course the actual formulas used behind the Earned Value calculation are far more complex than this simple definition.

A technique for measuring project performance and progress, based at its simplest on quantified measures of work planned (planned value) and work completed (earned value).

Why is Earned Value important Earned value management offers opportunities to major organisations, beyond the simple adherence to contract requirements. It allows an organisation to have transparency around projects, programmes and portfolios of standalone and integrated works, and provides a clearer indication of progress on largescale projects than other traditional monitoring techniques. In essence it allows organisations to keep projects on schedule and within budget. For those involved in the built environment, complex service provision or major projects, using earned value as a matrix provides the team with the ability to monitor, and report on, the cost status, performance against schedule and the value add of the work. That is the ‘value’ is equal to the amount of funds allocated or budgeted to complete it. Earned value is not only valuable to organisations; clients letting contracts also benefit from earned value metrics. The client can have clear visibility through weekly, monthly or quarterly reporting of the three elements of the work: the budget, the work undertaken and the value of their projects. Why are companies using EV? The reasons why a growing number of companies are using earned value as a reporting matrix are varied, however in essence there are three key themes

around why companies decide to start using earned value management: To track project performance and to identify any problems before the project begins to fundamentally fail (ie through over-spending or being behind on schedule). To give improved project transparency and accountability to both the project team, sponsors and stakeholders. The earned value reports are based on inputs from across the team, and therefore capturing hours, expenses and costs; they also give accurate non-manipulated projections showing good and bad performance and outcomes. This means that problems are quickly identified and management can then decided on the relevant remedial action. To streamline the planning process so that activities are kept to schedule throughout the life of the project. This is achieved by have a comprehensive approach that captures and displays detailed costings and programme schedules which then have real-time updates in terms of tracking committed costs and work delivered to date. This means actual outputs are tracked against planned outputs to provide accurate insight.

Examples of organisations using Earned Value There are examples of organisations using earned value. The MoD recommends that its project management staff use earned value management to be able to both work closely with counterparts in other government departments and to ensure that benefits are fully realised. It has been used on projects including the Future Offensive Air Capability programme. The major Crossrail programme was seen as a leader in best practice for earned value management, where all of the performance data was held centrally so that it was cleansed and robust. It also allowed a user to drill down to core data. In addition to the data warehouse there was a reporting functionality attached which allowed business intelligence reporting to produce dashboards. The quality and transparency of the data within the reports led to a positive behavioural change. As a result of the Crossrail success with earned value the National Audit Office recommended that both the Department for Transport and Network Rail introduce earned value management approach to monitor infrastructure programmes.

1. Each area of work can be organised to ensure work, schedule and cost are fully integrated. 2. One central data source rather than disparate separate systems. 3. It allows management by exception. 4.More robust decision making, particularly when both successful and unsuccessful projects are included. 5. All significant cost and schedule variances are easily detectable from as little as 10% completion . 6. The cumulative cost performance index (CPI) is also useful for determining a reasonable lower limit for the Estimate at Completion (EAC). 7. A bad schedule performance index (SPI) is predictive of later cost problems. 8. The SPI and CPI can be combined to estimate an upper bound to the EAC. 9. Regular reporting on CPIs is useful for cost performance trends and recommended for effective control. 10.The To-complete Performance Index (TCPI) is the work remaining divided by the budget remaining and indicates the level of performance that must be achieved to reach the required return on investment.

As more companies adopt Earned Value management for major projects then understanding how to apply it is essential.