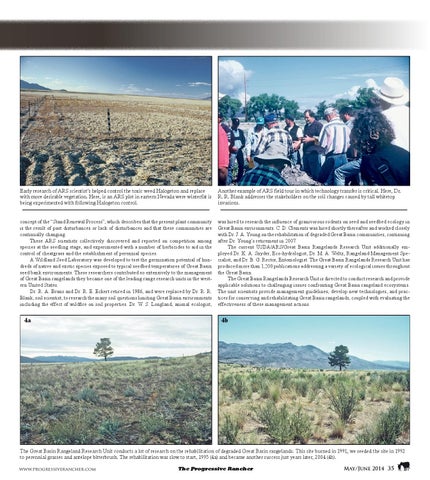 Early research of ARS scientist’s helped control the toxic weed Halogeton and replace with more desirable vegetation. Here, is an ARS plot in eastern Nevada were winterfat is being experimented with following Halogeton control.

Another example of ARS field tour in which technology transfer is critical. Here, Dr. R. R. Blank addresses the stakeholders on the soil changes caused by tall whitetop invasions.

concept of the “Stand Renewal Process”, which describes that the present plant community is the result of past disturbances or lack of disturbances and that these communities are continually changing. These ARS scientists collectively discovered and reported on competition among species at the seedling stage, and experimented with a number of herbicides to aid in the control of cheatgrass and the establishment of perennial species. A Wildland Seed Laboratory was developed to test the germination potential of hundreds of native and exotic species exposed to typical seedbed temperatures of Great Basin seed bank environments. These researchers contributed so extensively to the management of Great Basin rangelands they became one of the leading range research units in the western United States. Dr. R. A. Evans and Dr. R. E. Eckert retired in 1986, and were replaced by Dr. R. R. Blank, soil scientist, to research the many soil questions limiting Great Basin environments including the effect of wildfire on soil properties. Dr. W. S. Longland, animal ecologist,

The Great Basin Rangeland Research Unit conducts a lot of research on the rehabilitation of degraded Great Basin rangelands. This site burned in 1991, we seeded the site in 1992 to perennial grasses and antelope bitterbrush. The rehabilitation was slow to start, 1995 (4a) and became another success just years later, 2004 (4b). www.progressiverancher.com