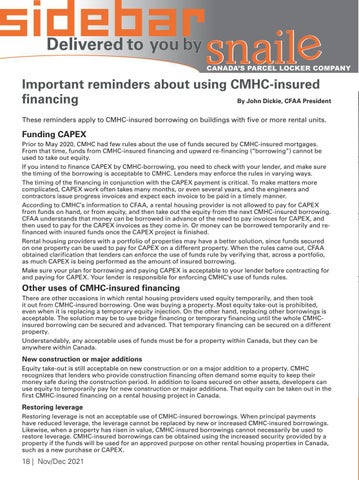 Delivered to you by Important reminders about using CMHC-insured By John Dickie, CFAA President financing These reminders apply to CMHC-insured borrowing on buildings with five or more rental units.

Funding CAPEX Prior to May 2020, CMHC had few rules about the use of funds secured by CMHC-insured mortgages. From that time, funds from CMHC-insured financing and upward re-financing (“borrowing”) cannot be used to take out equity. If you intend to finance CAPEX by CMHC-borrowing, you need to check with your lender, and make sure the timing of the borrowing is acceptable to CMHC. Lenders may enforce the rules in varying ways. The timing of the financing in conjunction with the CAPEX payment is critical. To make matters more complicated, CAPEX work often takes many months, or even several years, and the engineers and contractors issue progress invoices and expect each invoice to be paid in a timely manner. According to CMHC’s information to CFAA, a rental housing provider is not allowed to pay for CAPEX from funds on hand, or from equity, and then take out the equity from the next CMHC-insured borrowing. CFAA understands that money can be borrowed in advance of the need to pay invoices for CAPEX, and then used to pay for the CAPEX invoices as they come in. Or money can be borrowed temporarily and refinanced with insured funds once the CAPEX project is finished. Rental housing providers with a portfolio of properties may have a better solution, since funds secured on one property can be used to pay for CAPEX on a different property. When the rules came out, CFAA obtained clarification that lenders can enforce the use of funds rule by verifying that, across a portfolio, as much CAPEX is being performed as the amount of insured borrowing. Make sure your plan for borrowing and paying CAPEX is acceptable to your lender before contracting for and paying for CAPEX. Your lender is responsible for enforcing CMHC’s use of funds rules.

Other uses of CMHC-insured financing There are other occasions in which rental housing providers used equity temporarily, and then took it out from CMHC-insured borrowing. One was buying a property. Most equity take-out is prohibited, even when it is replacing a temporary equity injection. On the other hand, replacing other borrowings is acceptable. The solution may be to use bridge financing or temporary financing until the whole CMHCinsured borrowing can be secured and advanced. That temporary financing can be secured on a different property. Understandably, any acceptable uses of funds must be for a property within Canada, but they can be anywhere within Canada.