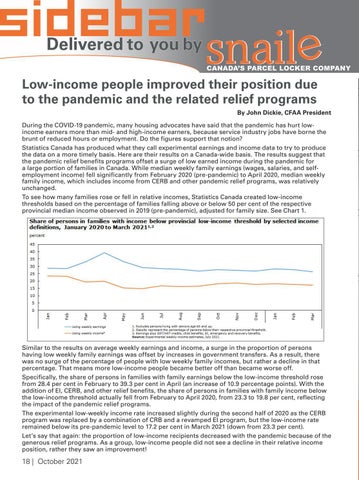 Delivered to you by Low-income people improved their position due to the pandemic and the related relief programs By John Dickie, CFAA President During the COVID-19 pandemic, many housing advocates have said that the pandemic has hurt lowincome earners more than mid- and high-income earners, because service industry jobs have borne the brunt of reduced hours or employment. Do the figures support that notion? Statistics Canada has produced what they call experimental earnings and income data to try to produce the data on a more timely basis. Here are their results on a Canada-wide basis. The results suggest that the pandemic relief benefits programs offset a surge of low earned income during the pandemic for a large portion of families in Canada. While median weekly family earnings (wages, salaries, and selfemployment income) fell significantly from February 2020 (pre-pandemic) to April 2020, median weekly family income, which includes income from CERB and other pandemic relief programs, was relatively unchanged. To see how many families rose or fell in relative incomes, Statistics Canada created low-income thresholds based on the percentage of families falling above or below 50 per cent of the respective provincial median income observed in 2019 (pre-pandemic), adjusted for family size. See Chart 1.

Similar to the results on average weekly earnings and income, a surge in the proportion of persons having low weekly family earnings was offset by increases in government transfers. As a result, there was no surge of the percentage of people with low weekly family incomes, but rather a decline in that percentage. That means more low-income people became better off than became worse off. Specifically, the share of persons in families with family earnings below the low-income threshold rose from 28.4 per cent in February to 39.3 per cent in April (an increase of 10.9 percentage points). With the addition of EI, CERB, and other relief benefits, the share of persons in families with family income below the low-income threshold actually fell from February to April 2020, from 23.3 to 19.8 per cent, reflecting the impact of the pandemic relief programs. The experimental low-weekly income rate increased slightly during the second half of 2020 as the CERB program was replaced by a combination of CRB and a revamped EI program, but the low-income rate remained below its pre-pandemic level to 17.2 per cent in March 2021 (down from 23.3 per cent). Let’s say that again: the proportion of low-income recipients decreased with the pandemic because of the generous relief programs. As a group, low-income people did not see a decline in their relative income position, rather they saw an improvement!