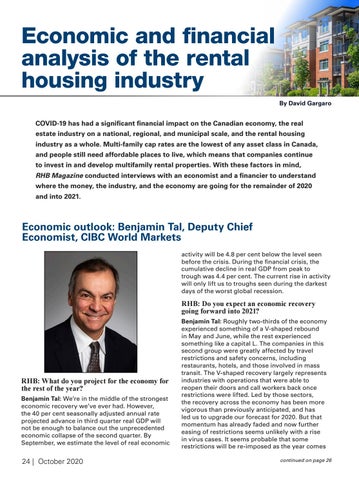 COVID-19 has had a significant financial impact on the Canadian economy, the real estate industry on a national, regional, and municipal scale, and the rental housing industry as a whole. Multi-family cap rates are the lowest of any asset class in Canada, and people still need affordable places to live, which means that companies continue to invest in and develop multifamily rental properties. With these factors in mind, RHB Magazine conducted interviews with an economist and a financier to understand where the money, the industry, and the economy are going for the remainder of 2020 and into 2021.

Economic outlook: Benjamin Tal, Deputy Chief Economist, CIBC World Markets activity will be 4.8 per cent below the level seen before the crisis. During the financial crisis, the cumulative decline in real GDP from peak to trough was 4.4 per cent. The current rise in activity will only lift us to troughs seen during the darkest days of the worst global recession.

RHB: Do you expect an economic recovery going forward into 2021?

RHB: What do you project for the economy for the rest of the year? Benjamin Tal: Weâ&#x20AC;&#x2122;re in the middle of the strongest economic recovery weâ&#x20AC;&#x2122;ve ever had. However, the 40 per cent seasonally adjusted annual rate projected advance in third quarter real GDP will not be enough to balance out the unprecedented economic collapse of the second quarter. By September, we estimate the level of real economic

Benjamin Tal: Roughly two-thirds of the economy experienced something of a V-shaped rebound in May and June, while the rest experienced something like a capital L. The companies in this second group were greatly affected by travel restrictions and safety concerns, including restaurants, hotels, and those involved in mass transit. The V-shaped recovery largely represents industries with operations that were able to reopen their doors and call workers back once restrictions were lifted. Led by those sectors, the recovery across the economy has been more vigorous than previously anticipated, and has led us to upgrade our forecast for 2020. But that momentum has already faded and now further easing of restrictions seems unlikely with a rise in virus cases. It seems probable that some restrictions will be re-imposed as the year comes continued on page 26

to an end. We expected the economy to hit a ceiling before a vaccine was deployed, but itâ&#x20AC;&#x2122;s happening earlier than expected. This has seen us lower the growth rate for 2021. The economy will finish next year largely where we expected as our last set of projections. The path looks a bit different, with growth showing up earlier.

RHB: How is the drop in GDP tied to employment? Benjamin Tal: The drop in GDP was more pronounced than the fall in employment and the rebound was more vigorous. While GDP dropped more than 18 per cent compared to less than 16 per cent for employment, both were about 9 per cent below pre-COVID-19 levels by the end of June. The drop in GDP relative to employment might have been because many affected operations held onto employees with the help of government support. But industries that had V-shaped recoveries are more productive and require fewer workers to generate the same amount of GDP as industries in the L-shaped economy, leading to a notable increase in average productivity in the economy. The struggles of the labour market relative to the bounce in GDP are likely to create a higher unemployment rate. We project the unemployment rate to average roughly 8.5 per cent in 2021, or about 3 per cent above precrisis level.

RHB: How did government incentives and programs affect the economy, and what will happen when they end? Benjamin Tal: Government support offset the drop in employee compensation in the second quarter. This is the only recession in history that saw disposable income rising. Government support and savings from not spending on services are why many retailers have seen strong demand for their wares. Another source of savings came from mortgage and loan deferrals in which households were able to take a vacation from their monthly financial obligations. We estimate that roughly $10 billion in payments were deferred from March to September. Thereâ&#x20AC;&#x2122;s evidence that a significant portion of the deferred payments were kept in deposit accounts as opposed to being spent, while some was used to optimize debt. However, unless extended, Canadians will begin to run through their employment insurance eligibility in the second quarter of next year, when the unemployment rate is likely to hover around the peak of the 2008-09 financial crisis. Accordingly, we see household spending remaining below its pre-crisis level through 2021.

RHB: Unemployment is very high, discretionary spending is low, and the economy has contracted. How do you project these will affect the multi-residential industry? Benjamin Tal: While housing activity has been roaring back in recent months, we continue to see a softening ahead. As immigration has stalled, and swarms of younger Canadians are again living with their parents, both resale and construction activity are likely to cool in the months ahead. A large part of the surge in housing starts has been in the downtown condo space, which has already been seeing sagging rental demand.

RHB: What do you project for monetary policy going forward? Benjamin Tal: The strengthening in the Canadian dollar against falling oil prices shows how times have changed. But Canada will need a weaker Canadian dollar to boost non-energy exports. The economy has only seen healthy contributions from exports when the Canadian dollar has been weaker than 1.30. But even that would leave the economy at the end of 2022 roughly 1.5 per cent below where the trend prior to the pandemic would have taken it. As a result, policymakers have much to do. The Bank of Canada has its pedal to the metal and has committed to keeping it there, so the wild card will be fiscal policy. Canadian governments have used fiscal space to blunt the economic impacts of the virus and will only withdraw it as job creation takes hold. Fiscal stimulus in Canada was more robust than most OECD countries when compared to the economic damage. Once a vaccine is deployed and restrictions are fully lifted, the economy will be less dependent on fiscal handouts.

We project the unemployment rate to average roughly 8.5 per cent in 2021, or about 3 per cent above pre-crisis level.

Financing, borrowing, and investment: Rena Malkah, President, Cyr Funding Inc. RHB: There have been requests for loan deferrals and forbearance in the first half of the year. Where is this going in the second half of the year? Rena Malkah: There have been loan deferrals and forbearance during the first six months of COVID-19 from March to September; however, these circumstances are over now. For the borrower, it is not helpful to defer a loan because any deferred interest is added to the loan amount and then they have to pay interest on top of interest. Loan deferrals are also negatively impacting personal credit as they show up on the borrowerâ&#x20AC;&#x2122;s credit bureau.

RHB: What do financial companies want to see from borrowers/investors who are looking for funding during COVID-19? RHB: With the low cost of borrowing, are investors, developers, and building owners taking advantage of the opportunity? Rena Malkah: Yes, investors, developers, and building owners are making the most of the low borrowing rates and purchasing opportunities to invest in the rental housing market. However, they are approaching these situations with a more cautious approach than they have in the past due to the uncertainty of the COVID-19 situation.

RHB: Where is the money going? Who is investing in what?

RHB: Do investors have more opportunities to buy during COVID-19 than usual, or fewer? Rena Malkah: Investors still have many opportunities to buy properties and buildings as there are distress situations due to companiesâ&#x20AC;&#x2122; need to rid themselves of underperforming assets. They should try contacting receivers who manage real estate and get a deal below market value.

RHB: Do you see greater or fewer opportunities to invest in rental properties in 2021? And why do you believe this will be the case? Rena Malkah: We see more opportunities for investing especially if there is a second wave or lockdown. Values may be lower and a good time to buy. Interest rates may also go down again.

Rena Malkah: Investors are interested in buying income-producing properties such as multifamily and industrial buildings. Retail plazas are not faring as well as they have in the past due to closures of many businesses temporarily during COVID-19 or permanently. Online shopping has reduced foot traffic to malls across the country. Hospitality properties have also been hit hard, as have gas stations, so those types of properties are not a preferred investment at this time.

RHB: What will be the impact when government incentives and programs come to an end?

RHB: Thank you for your input and participation.

Rena Malkah: The impact when government incentives and programs come to an end will be serious as many individuals and employers will not be able to earn sufficient income or cover expenses, especially if a second wave results in another lockdown.