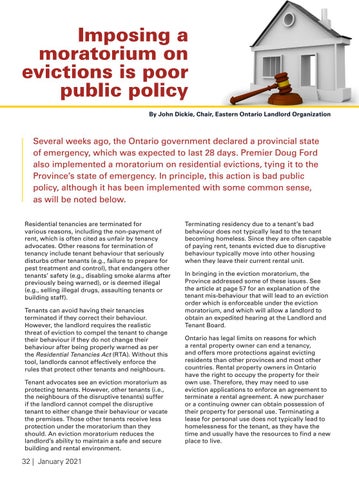 Several weeks ago, the Ontario government declared a provincial state of emergency, which was expected to last 28 days. Premier Doug Ford also implemented a moratorium on residential evictions, tying it to the Province’s state of emergency. In principle, this action is bad public policy, although it has been implemented with some common sense, as will be noted below. Residential tenancies are terminated for various reasons, including the non-payment of rent, which is often cited as unfair by tenancy advocates. Other reasons for termination of tenancy include tenant behaviour that seriously disturbs other tenants (e.g., failure to prepare for pest treatment and control), that endangers other tenants’ safety (e.g., disabling smoke alarms after previously being warned), or is deemed illegal (e.g., selling illegal drugs, assaulting tenants or building staff). Tenants can avoid having their tenancies terminated if they correct their behaviour. However, the landlord requires the realistic threat of eviction to compel the tenant to change their behaviour if they do not change their behaviour after being properly warned as per the Residential Tenancies Act (RTA). Without this tool, landlords cannot effectively enforce the rules that protect other tenants and neighbours. Tenant advocates see an eviction moratorium as protecting tenants. However, other tenants (i.e., the neighbours of the disruptive tenants) suffer if the landlord cannot compel the disruptive tenant to either change their behaviour or vacate the premises. Those other tenants receive less protection under the moratorium than they should. An eviction moratorium reduces the landlord’s ability to maintain a safe and secure building and rental environment.

Terminating residency due to a tenant’s bad behaviour does not typically lead to the tenant becoming homeless. Since they are often capable of paying rent, tenants evicted due to disruptive behaviour typically move into other housing when they leave their current rental unit. In bringing in the eviction moratorium, the Province addressed some of these issues. See the article at page 57 for an explanation of the tenant mis-behaviour that will lead to an eviction order which is enforceable under the eviction moratorium, and which will allow a landlord to obtain an expedited hearing at the Landlord and Tenant Board. Ontario has legal limits on reasons for which a rental property owner can end a tenancy, and offers more protections against evicting residents than other provinces and most other countries. Rental property owners in Ontario have the right to occupy the property for their own use. Therefore, they may need to use eviction applications to enforce an agreement to terminate a rental agreement. A new purchaser or a continuing owner can obtain possession of their property for personal use. Terminating a lease for personal use does not typically lead to homelessness for the tenant, as they have the time and usually have the resources to find a new place to live.

The main problem with an eviction moratorium is that some tenants who can pay rent are choosing to withhold their rent payments until they are legally ordered to pay. Some tenants who have lost their jobs, or have faced financial challenges, require government assistance to pay their rent arrears. However, they often only seek financial aid once the landlord has commenced an eviction application. When the government imposes an eviction moratorium, many landlords are essentially forced to provide housing without receiving compensation.

payment plan. As long as the tenant follows the plan, the LTB will not order their eviction. The tenant always has the opportunity to save the tenancy if they pay their rent arrears.

It is unjust to allow people to receive the benefit of housing without having to pay for it. That is like allowing people to walk out of a grocery store without paying for the groceries in their cart. No store owner would accept that situation, and neither would the police or the courts. However, the government expects landlords to accept that situation.

Rental housing providers would like to see a dedicated program from the Province to pay rent arrears due to COVID-19, and to support people who are locked into higher rents than they can afford with their reduced incomes. However, the Province should not force landlord to provide free housing to tenants with income problems. No one expects grocery stores to feed the poor or department store owners to clothe the poor. Equally, rental housing providers should not be expected to house the poor, regardless of the reasons they are poor.

The RTA makes an eviction moratorium unnecessary. When the Landlord and Tenant Board (LTB) imposes an order for termination due to non-payment of rent, the LTB allows a tenant to stay in the unit as long as they make payments toward rent arrears. The LTB encourages tenants and landlords to create a payment plan for unpaid rent. If the landlord and tenant do not come to agreement on a plan, the LTB will impose its own

The federal and provincial governments are already helping people who have faced financial hardship due to COVID-19. In many municipalities, the city will provide funds to pay off rent arrears in order to keep people housed. The Province has provided a great deal of funding for that and other pandemic relief.