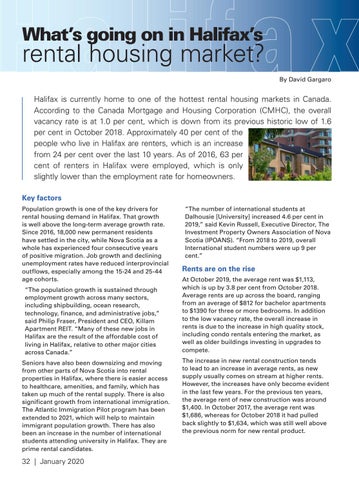 Halifax What’s going on in Halifax’s

Halifax is currently home to one of the hottest rental housing markets in Canada. According to the Canada Mortgage and Housing Corporation (CMHC), the overall vacancy rate is at 1.0 per cent, which is down from its previous historic low of 1.6 per cent in October 2018. Approximately 40 per cent of the people who live in Halifax are renters, which is an increase from 24 per cent over the last 10 years. As of 2016, 63 per cent of renters in Halifax were employed, which is only slightly lower than the employment rate for homeowners.

Key factors Population growth is one of the key drivers for rental housing demand in Halifax. That growth is well above the long-term average growth rate. Since 2016, 18,000 new permanent residents have settled in the city, while Nova Scotia as a whole has experienced four consecutive years of positive migration. Job growth and declining unemployment rates have reduced interprovincial outflows, especially among the 15-24 and 25-44 age cohorts. “The population growth is sustained through employment growth across many sectors, including shipbuilding, ocean research, technology, finance, and administrative jobs,” said Philip Fraser, President and CEO, Killam Apartment REIT. “Many of these new jobs in Halifax are the result of the affordable cost of living in Halifax, relative to other major cities across Canada.” Seniors have also been downsizing and moving from other parts of Nova Scotia into rental properties in Halifax, where there is easier access to healthcare, amenities, and family, which has taken up much of the rental supply. There is also significant growth from international immigration. The Atlantic Immigration Pilot program has been extended to 2021, which will help to maintain immigrant population growth. There has also been an increase in the number of international students attending university in Halifax. They are prime rental candidates.

“The number of international students at Dalhousie [University] increased 4.6 per cent in 2019,” said Kevin Russell, Executive Director, The Investment Property Owners Association of Nova Scotia (IPOANS). “From 2018 to 2019, overall International student numbers were up 9 per cent.”

Rents are on the rise At October 2019, the average rent was $1,113, which is up by 3.8 per cent from October 2018. Average rents are up across the board, ranging from an average of $812 for bachelor apartments to $1390 for three or more bedrooms. In addition to the low vacancy rate, the overall increase in rents is due to the increase in high quality stock, including condo rentals entering the market, as well as older buildings investing in upgrades to compete. The increase in new rental construction tends to lead to an increase in average rents, as new supply usually comes on stream at higher rents. However, the increases have only become evident in the last few years. For the previous ten years, the average rent of new construction was around $1,400. In October 2017, the average rent was $1,686, whereas for October 2018 it had pulled back slightly to $1,634, which was still well above the previous norm for new rental product.

Rental development is also increasing According to CMHC, there are currently more than 4,000 rental housing units under construction in Halifax, which is the highest level ever seen. There were also more than 1,000 rental units completed last year. At present, 68 per cent of new builds in Halifax are intended to be apartment rentals. A number of condominiums were converted to rental properties, and recently renovated structures also increased the rental supply. “Positive market fundamentals continue to increase investment in multi-family development, with an increase in the number of projects underway in the city,” said Fraser. “At Killam, we continue to invest in our properties to remain competitive with new developments in the market, and we will also continue to develop new properties.” However, rental housing supply has not kept up with demand growth, particularly within Halifax City proper. Although there is strong multi-unit residential development growth, much of it is occurring outside the City of Halifax, in suburban areas where land costs are lower. Construction times on rental developments have been extended due to the skilled labour shortage.

“Short-term relief in vacancy is expected once units under construction enter the market, as renters in older buildings migrate to new buildings, which will open vacancies in older buildings,” said Russell. “Larger projects will have a significant impact on supply over a short period when they eventually hit the market.”

Conclusion Halifax is continuing to grow, and the demand for rental properties is also on the rise, with no apparent end in sight. Given the strong market fundamentals, developers of rental housing have a strong pipeline of multi-unit residential properties in the works, and there is room for more development to take advantage of low vacancy rates and increasing rents. “CFAA is delighted to hold this year’s Rental Housing Conference in Halifax, the hub of Atlantic Canada, from June 8 to 10,” said John Dickie, President, Canadian Federation of Apartment Associations (CFAA). “Among many other topics, we will talk about why Halifax and other cities are booming, and what that means for rental housing in Halifax and elsewhere across Canada.”

Custom Solutions for the Rental Housing Industry Your tenants need insurance! ZipSure.ca’s Landlord Programs are innovative, value-add insurance options that can be purchased by tenants directly, or by the landlord which automatically provides insurance coverage to the tenants as a built-in, tenant benefit included in the cost of rent.