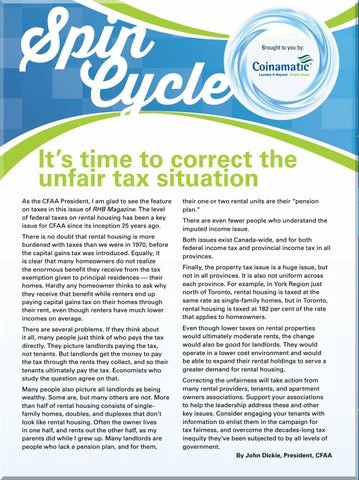 It’s time to correct the unfair tax situation As the CFAA President, I am glad to see the feature on taxes in this issue of RHB Magazine. The level of federal taxes on rental housing has been a key issue for CFAA since its inception 25 years ago. There is no doubt that rental housing is more burdened with taxes than we were in 1970, before the capital gains tax was introduced. Equally, it is clear that many homeowners do not realize the enormous benefit they receive from the tax exemption given to principal residences --- their homes. Hardly any homeowner thinks to ask why they receive that benefit while renters end up paying capital gains tax on their homes through their rent, even though renters have much lower incomes on average. There are several problems. If they think about it all, many people just think of who pays the tax directly. They picture landlords paying the tax, not tenants. But landlords get the money to pay the tax through the rents they collect, and so their tenants ultimately pay the tax. Economists who study the question agree on that. Many people also picture all landlords as being wealthy. Some are, but many others are not. More than half of rental housing consists of singlefamily homes, doubles, and duplexes that don’t look like rental housing. Often the owner lives in one half, and rents out the other half, as my parents did while I grew up. Many landlords are people who lack a pension plan, and for them,

their one or two rental units are their “pension plan.” There are even fewer people who understand the imputed income issue. Both issues exist Canada-wide, and for both federal income tax and provincial income tax in all provinces. Finally, the property tax issue is a huge issue, but not in all provinces. It is also not uniform across each province. For example, in York Region just north of Toronto, rental housing is taxed at the same rate as single-family homes, but in Toronto, rental housing is taxed at 182 per cent of the rate that applies to homeowners. Even though lower taxes on rental properties would ultimately moderate rents, the change would also be good for landlords. They would operate in a lower cost environment and would be able to expand their rental holdings to serve a greater demand for rental housing. Correcting the unfairness will take action from many rental providers, tenants, and apartment owners associations. Support your associations to help the leadership address these and other key issues. Consider engaging your tenants with information to enlist them in the campaign for tax fairness, and overcome the decades-long tax inequity they’ve been subjected to by all levels of government. By John Dickie, President, CFAA