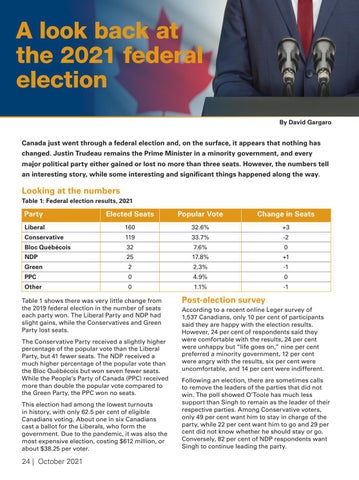 A look back at the 2021 federal election By David Gargaro

Canada just went through a federal election and, on the surface, it appears that nothing has changed. Justin Trudeau remains the Prime Minister in a minority government, and every major political party either gained or lost no more than three seats. However, the numbers tell an interesting story, while some interesting and significant things happened along the way.

Table 1 shows there was very little change from the 2019 federal election in the number of seats each party won. The Liberal Party and NDP had slight gains, while the Conservatives and Green Party lost seats. The Conservative Party received a slightly higher percentage of the popular vote than the Liberal Party, but 41 fewer seats. The NDP received a much higher percentage of the popular vote than the Bloc Québécois but won seven fewer seats. While the People’s Party of Canada (PPC) received more than double the popular vote compared to the Green Party, the PPC won no seats. This election had among the lowest turnouts in history, with only 62.5 per cent of eligible Canadians voting. About one in six Canadians cast a ballot for the Liberals, who form the government. Due to the pandemic, it was also the most expensive election, costing $612 million, or about $38.25 per voter.

Post-election survey According to a recent online Leger survey of 1,537 Canadians, only 10 per cent of participants said they are happy with the election results. However, 24 per cent of respondents said they were comfortable with the results, 24 per cent were unhappy but “life goes on,” nine per cent preferred a minority government, 12 per cent were angry with the results, six per cent were uncomfortable, and 14 per cent were indifferent. Following an election, there are sometimes calls to remove the leaders of the parties that did not win. The poll showed O’Toole has much less support than Singh to remain as the leader of their respective parties. Among Conservative voters, only 49 per cent want him to stay in charge of the party, while 22 per cent want him to go and 29 per cent did not know whether he should stay or go. Conversely, 82 per cent of NDP respondents want Singh to continue leading the party.

Most voters were decided on who they would vote for prior to the leaders’ debates. In fact, 83 per cent say they voted for their original choice, while 17 per cent say they changed which party they supported over the course of the campaign. On election day, 73 per cent voted for the party they preferred the most, while 27 per cent said they voted strategically to stop another party. Only six per cent of voters say they changed their minds due to the debates, while 39 per cent said the debates confirmed their choice. Nearly half (49 per cent) of survey respondents say they had decided on who to vote for prior to the start of the campaign, with another 18 per cent made their decision in the first two weeks of the campaign, nine per cent in the final weekend, and eight per cent on election day.

New campaign tactic The NDP took many people by surprise by announcing their platform on August 12, before the Liberal Party formally announced the snap election on August 15. This went against the normal practice from past federal elections, where the parties would release individual parts of their platforms in daily announcements during the campaign. They would then package their entire platform about 10 days before election day, releasing it in a fully detailed platform document at that time. The NDP took the initiative with the early release of their platform, following up with costing on September 11. The Conservatives also released their full platform early in the campaign, on August 16, with full costing on September 8, preceding the first leaders’ debate. The Liberals released their housing platform, “A Home. For Everyone” on August 24, following up with their full, costed platform on September 1.

The rise of wedge politics Wedge politics is a technique in which political parties attempt to split the electorate into two clearly defined sides on a topic. Politicians will simplify complex issues into basic black and white arguments, and then state they are on one side (i.e., the “correct” one) and place their opponents on the other side. There is no middle ground. This approach motivates a party’s supporters, and fosters fear or doubt in voters considering their opponents. Wedge politics eliminates the potential for thoughtful debate. The goal is to get opponents to speak out loudly on the “wrong” side of the debate, which will draw attention to the wedge, creating fuel for added simplification and political spin. However, if the opponent does not speak up, the attempted wedge will often fail.

Wedge issues in this campaign included vaccinations, private health care, and a potential tax on capital gains on principal residences. Politicians targeted large, wealthy businesses (e.g., banks, tech) in wedge campaign tactics, painting them as greedy capitalists who gouge consumers at every turn or fail to pay their share of taxes. They did the same on housing, targeting large corporations, foreign investors, and speculators as the villains, and taking the side of renters and first-time home buyers. Again, they simplified the issues to black and white positions without providing any part of the opposite side of issues. For example, during an English-language debate, O’Toole claimed the Liberal government would tax the sale of primary residences. During the segment on affordability, O’Toole said, “Mr. Trudeau, Canadians are worried you’re going to be taxing their primary home sales…Your advisers have said it … it’s on page 14 of its policy book.” However, page 14 of the Liberal platform refers to the establishment of “an anti-flipping tax, requiring properties to be held for at least 12 months.” At present, capital gains tax applies to profits made from the sale of secondary residences (such as cottages or investment properties), not principal residences. The proposed anti-flipping tax is designed to curb the abuse of the exemption of principal residences, as it will require property owners to hold a home for at least 12 months before selling it with the exemption. Other examples were Liberal and NDP knocks on large rental housing providers. Rental housing industry association executives could have spoken out more during the election to clarify the mischaracterization of our industry and rental housing issues in some party platforms. Given that it was a highly political campaign, such advocacy could easily have had backfired and led to our members being misrepresented more. “There was very little chance that thoughtful advocacy would be fairly represented, or serve to change public discourse,” said John Dickie, President, CFAA. “However, the leaders of CFAA and other industry associations are confident that, now that the election is over, we are wellpositioned to provide strong, effective advocacy at the political and bureaucratic levels to ensure that government policy does not unfairly target rental housing businesses.”

The Liberal platform reiterated what the federal government has done since 2015, which included creating the National Housing Strategy, signing the Canada Housing Benefit agreements with the provinces and territories, introducing the FirstTime Home Buyers’ Incentive, imposing a national tax on vacant property owned by non-resident non-Canadians, and launching the Rapid Housing Initiative. The Liberal platform announced a plan to create a new rent-to-own program, which will make it easier for renters to get into home ownership. The principles of this program include getting landlords to commit to charging lower-thanmarket rent to help tenants save up for a down payment on a home, having the landlord commit to ownership within five years, and setting safeguards to protect the future homeowner. “CFAA’s members generally hold and manage rental properties as investments,” said Dickie. “In rent-to-own, the asset is sold off, which is the opposite of our members’ business plan. Some people who develop single family homes may find rent-to-own attractive, but program take-up will depend on the incentives to make up for the lowerthan-market rent requirement.” The Liberal platform also targeted the financialization of housing, focusing on how REITs are collecting large portfolios of Canadian rental housing, which is “making your rent more expensive.” The government plans to review the tax treatment for those businesses, and to review the down payment requirements for investment properties. They will also put in place “policies to curve excessive profits … while protecting small independent landlords.” “REIT investors already pay taxes at their personal marginal tax rate, which is usually very high,”

said Dickie. “To keep their trust status, REITs are obliged to pay out a high percentage of the earnings. CFAA believes that any fair-minded review of the REIT tax situation will find that no changes are needed.” The Liberal Party promised to invest $4 billion in a new Housing Accelerator Fund to help increase the annual housing supply in the largest cities across Canada, with a target of 100,000 new middle-class homes by 2024-25. The fund will provide money to help the municipalities streamline their planning and permitting processes, and the federal government will work with cities to make better use of vacant or underused properties. The Liberal platform included the investment of more which is usually in the National Housing CoInvestment Fund, doubling its initial allocation, to help affordable housing providers purchase land and buildings to develop and preserve more units. The platform also promises to provide financial support to convert empty office and retail space into market-based housing, as well as support for Indigenous housing.

Conclusion While it might seem like the federal government spent more than $600 million to get the exact same results we had before the election, a lot of things happened along the way. There were some interesting post-election views, a different approach to the timing of the release of the election platforms, and continued use of wedge politics directed at business, as well as other issues. The Liberals made some significant promises and policy decisions related to housing and the rental housing industry.